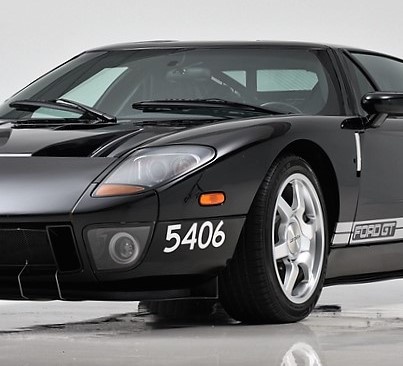 If there ever was a car that deserved the title of “instant collectible,” it’s the Ford GT. Modeled after Ford’s all-conquering GT40 endurance racers of the 1960s, the cars that beat Ferrari at Le Mans and dominated the classic 24-hour race, the mid-engine Ford GT was produced for just two model years, 2005-2006.

Today, it is a star entry at collector car auctions, often selling for twice or more than its original retail price.

Ford first rolled out a running, drivable prototype of the GT in 2003. Named CP-1 for Confirmation Prototype 1, and given VIN 004, the prototype included many experimental features, some of which made it into production, some that did not.

The CP-1 prototype will be offered at auction in January at Russo and Steele during its January 18-22 sale at Salt River Fields at Talking Stick, a new location for the Scottsdale, Arizona, auction.

“A true motorsports and design landmark in every respect and an essential part of the Ford GT development and testing process, CP-1/VIN 004 stands as an incredible link bridging the original GT40 of the 1960s to the current Ford GT that took on the world’s best and won at the 2016 running of the 24 Hours of Le Mans,” according to a Russo and Steele news release. “Truly historic as the first powered and fully functional Ford GT prototype, CP-1/VIN 004 offers an incredible opportunity at auction.”

A complete interior was installed for the first time

“GT Joey” Limongelli, a noted GT collector and author of Ford GT 2005-2006: The Complete Owners Experience, purchased the prototype  from Ford in 2008.  At the time of the sale, Ford engineers installed an electronic chip limiting the car’s top speed to just 5 mph, which essentially determined its use as a display-only vehicle.

The CP-1 prototype resurfaced in June 2016 when it was  offered by Barrett-Jackson during its inaugural Northeast Auction.   The car went unsold when bidding failed to meet the reserve.

The car is something of a time capsule that retains the test connections and monitoring equipment used by the engineers for the Ford GT’s road and emissions certification. The factory Build Sheet documentation comes with the prototype.

Also featured on the historic vehicle are the autographs of 13 members of the original Ford GT design and development team “including Bill Ford, GT chief designer Camillo Pardo, GT chief design engineer Fred Goodnow, and even Carroll Shelby, who played a major role in the Ford GT testing and development program,” the news release says.

For information about the Russo and Steele sale in Scottsdale, visit the auction website.