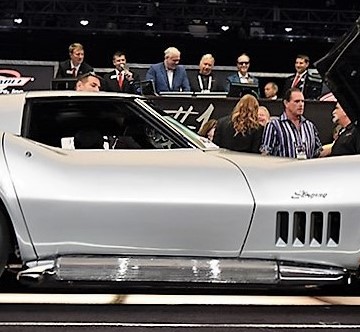 While it’s impossible to gauge pent-up demand until you tap into it, Barrett-Jackson managed to unleash a wave of enthusiasm with its inaugural Northeast Auction, held June 23-25 at the Mohegan Sun Resort and Casino in Connecticut.

Barrett-Jackson’s first foray into the northeastern corner of the United States scored the first “double sellout” in the Scottsdale auction company’s 45-year history: Admission tickets sold out shortly after going on sale and consignment spots for auction vehicles sold out days before the sale began.

More than 90,000 people attended, the company said afterward, a record for a three-day Barrett-Jackson auction and the biggest crowd ever for any event at Mohegan Sun. Results were $26 million in sales and a 96 percent sell-through rate for the overwhelmingly no-reserve sale, a signature feature of Barrett-Jackson collector car auctions.

A 1969 Chevrolet Corvette L88 coupe was the top-sellng car

Craig Jackson, chairman and chief executive of Barrett-Jackson, was ebullient after the sale.

“It was incredible to witness the electricity that filled our arena,” Jackson said. “The overwhelming reception for our Northeast Auction is a testament to the level of respect for Barrett-Jackson in the collector car community.”

The Northeast Auction was announced in 2015 shortly after Barrett-Jackson said it would not return to Reno, Nevada, after three years of auctions during the Hot August Nights collector car festival. The Reno auction never really hooked up, which was attributed to the sale competing with so many other events during Hot August Nights celebration.

With the addition of the Mohegan Sun event, Barrett-Jackson maintained its annual schedule of four auctions: The massive flagship Scottsdale sale in January; the Palm Beach, Florida, sale in April; the Northeast Auction in June; and the Las Vegas event in October. Two of the auctions are held in the West and two in the East, and two of them are held at casinos – Mandalay Bay in Vegas and Mohegan Sun.

Barrett-Jackson has established itself as the best-known of collector car auctions after pioneering live cable-television coverage of its sprawling events, originally on the Speed channel, now on Velocity and Discovery. The resulting popularity of the unique, crowd-pleasing brand of auctioneering has attracted large television audiences, huge crowds of spectators at the auctions, and a consistently impressive contingent of bidders.

For many old-car hobbyists and collectors, especially those whose interests focus on American classics, muscle cars and customs, attending a Barrett-Jackson auction has become a bucket-list item. Thus the resounding response to the first Northeast Auction was not really a surprise.