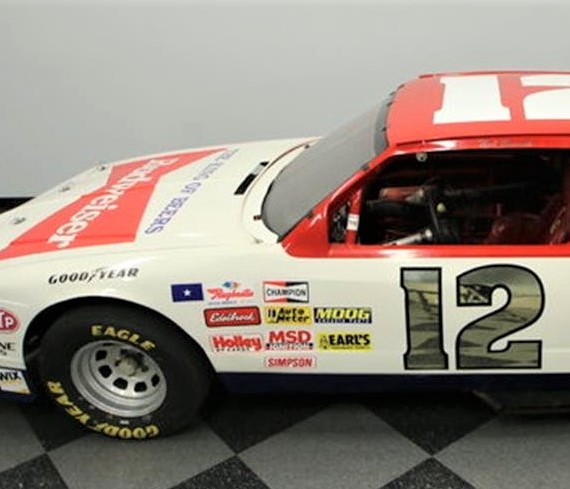 I was inspired for the Pick of the Day by the season-ending race for the 2016 Sprint Cup series, when Jimmie Johnson won his seventh championship. This awesome achievement pushed me to take a look at vintage stock cars for sale on ClassicCars.com.

Little known fact: Not only am I a longtime NASCAR fan but a former NASCAR driver – I raced from 1996-2001 in the NASCAR Winston West, Featherlite Southwest Tour and NASCAR Goody’s Dash series. So, yes, I have an affinity for NASCAR stock cars, especially old ones.

What I found among our listings was a stunning deal on this 1986 Chevrolet Monte Carlo Aerocoupe, an honest piece of motorsports history that was campaigned by the legendary Junior Johnson team and driven by none other than NASCAR legend Neil Bonnett in the 1984-1986 seasons. Not a replica of the team car but the actual car.

If this were a historic sports racing car, such as a Porsche or a Ferrari, it would cost in excess of $250,000. Yet this genuinely important stock car that is directly linked to some of the most legendary builders, owners and drivers that NASCAR has ever known has an asking price of just $32,995, an amazing deal.

This seems to be a typical price for such NASCAR racing relics; that such memorable competition stock cars are available for so little money baffles me. They are an integral part of American racing history and are eligible for many vintage racing events, making them exceptional bargains.

This car has a real Banjo Matthews chassis and is in full race prep with a 350cid V8 fan motor bored 0.30 over, huge headers running to side exhaust, and an aluminum radiator, according to the Lutz, Florida, dealer advertising the car. It features NASCAR spec disk brakes, a new race seat and harness, and a fuel cell.

The Monte Carlo Aerocoupe is an interesting car in that it is the last time a manufacturer created a special production car just to win races, something we had not seen since the days of the Ford Talladega and Dodge Daytona/Plymouth Superbird cars of the 1960s and early ’70s. The Aerocoupe was an improved aerodynamic design of the standard Monte Carlo by modifying the brick-like design of the Monte Carlo with the addition of a lower front chin spoiler and fastback rear window to give them an increased aerodynamic advantage.

At the time, it was the most advanced stock-car body design on the track, and it brought such drivers as Bonnett and Dale Earnhardt to the winners’ circle again and again throughout the mid- to late-1980s

As with any racer, this one is going to need a little freshening, but at this asking price, it represents an amazing deal on a car from the golden era of stock car racing, when incredible cars and legendary drivers made NASCAR the global phenomenon that it is today.