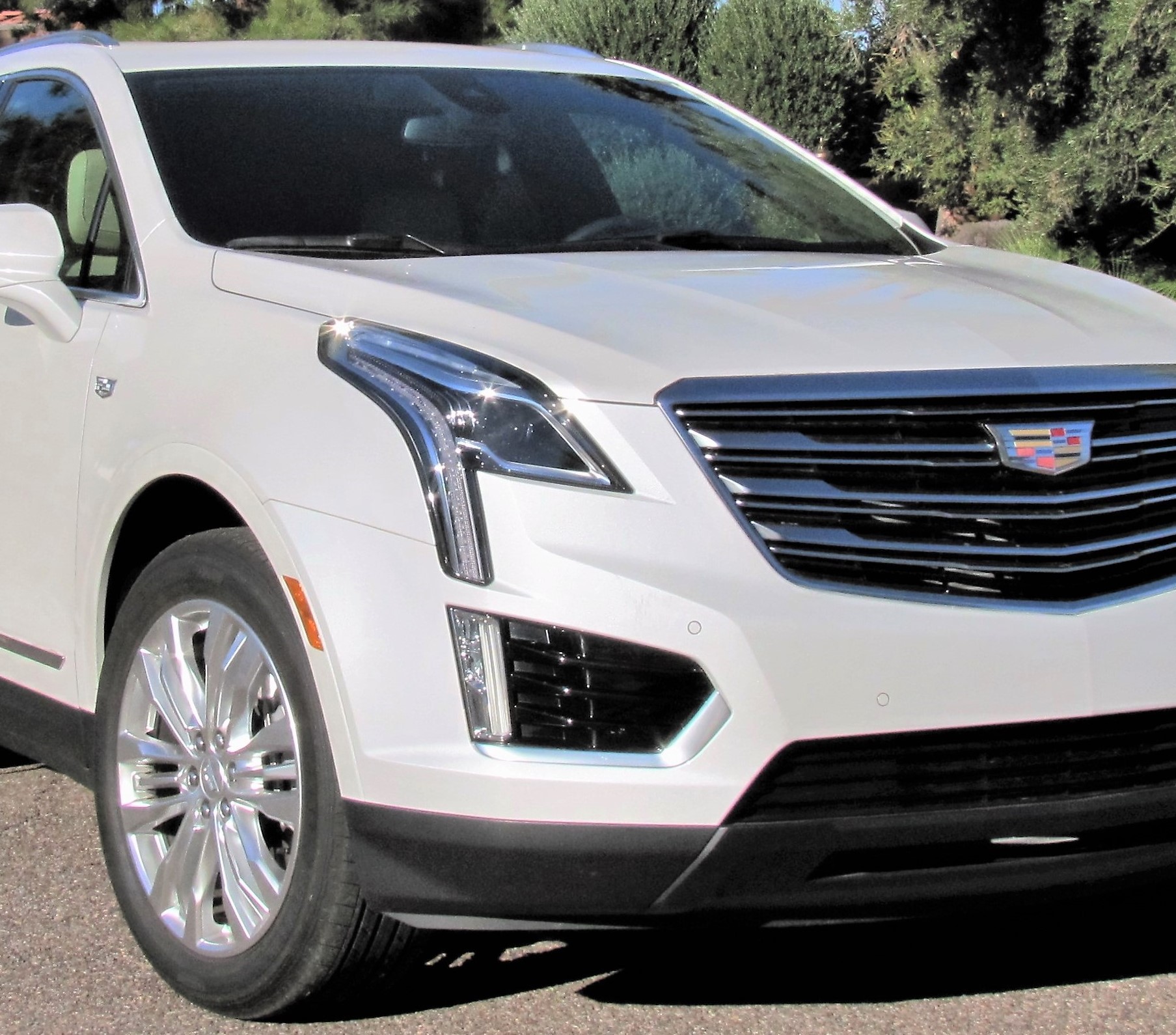 Picture an alien spacecraft approaching above a dark highway and you get the idea of the styling of Cadillac’s latest midsize crossover SUV, the XT5. This exotic-looking SUV, which introduces a new chassis and new nomenclature for the GM luxury brand, replaces the SRX for 2017.

XT5 is a flashy rendition even by Cadillac’s usual extroverted standards, a showy look-at-me crossover patterned after the division’s other SUVs and sedans, including its biggest and most high-profile product, Escalade. The lighting up front, with the flowing LED strips running down the fenders, are certainly distinctive, and everybody will see you coming, especially at night.

Definitely a love-it- or hate-it design, but in line with Cadillac’s successful product push of recent years, which provides plenty of sizzle to go with the steak.

XT5 is the first in a series of new luxury crossovers, Cadillac says, each bearing the XT designation. XT5 is the smallest crossover for Cadillac, at least for now, a midsize wagon that is loaded with luxury, technology and drivability features. The interior is swathed with leather and sparkling trim, and brimming with features that are accessed via unique switchgear.

Compared with the outgoing SRX, XT5 seems more refined, with improved driving manners and more-sophisticated interior. The cabin is noticeably larger, although the sloping roofline that looks so attractive on the outside cuts into rear headroom and cargo height. XT5 lost some weight compared with SRX, 268 pounds according to Cadillac.

The power rear liftgate has an interesting height-memory feature, from normal to extra-wide, the latter being much appreciated by those of us tall enough to have bonked our heads on liftgates.

For a Cadillac crossover, the ride is surprisingly firm and responsive, the stiffened chassis no doubt contributing to its agility. The Caddy that I drove, a Premium Luxury model, was equipped with GM’s Continuous Damping Control that constantly monitors and adjusts the ride depending on surface and driver demands. That comes standard on XT5s with the larger 20-inch alloy wheels, which our test model had.

XT5 handles nicely for this class of tall vehicle. While it feels kind of heavy in typical SUV fashion, it does hunker down and roars through curves in a sporty way.

There’s just one drivetrain available, a newly developed 310-horsepower, 3.6-liter V6, coupled with an eight-speed automatic transmission. The engine churns out plenty of pull, although I’ve read some other reviews that found it lacking in gusto. I thought it had enough, but it would be good if Cadillac offered a larger-engine option engine for people who want more performance.

For improved city gas mileage, the engine comes with stop-start functionality which turns it off when stopped, such as in traffic or at a light, and starts it up again when you release the brake. Mostly unnoticeable but somewhat annoying in stop-and-go traffic.

The interior is pretty splendid, fragrant with leather seats and trim, and a dashboard that is handsomely designed in horizontal forms, with good workmanship evident. Cadillac boasts that the interior of the XT5 and all of it models have “cut-and-sewn wrapped panels” instead of the molded surfaces found in most vehicles. The tailoring looks first-rate.

There are some interesting switches on the dash that seems weird at first but become easy to manipulate once you get used to them.

GM has taken hits over the years for computer-interface difficulties, which the latest version of the Cadillac CUE system is designed to alleviate. The system even has iPhone and Android compatibility, in which you can load your favorite apps and other functions.

Cue seemed fairly straightforward and easy to use in most respects, although the navigation system was a struggle that I never did overcome. All I wanted to do was see the street map, but despite my driving in Phoenix, Arizona, the system kept insisting that we were in Warren, Michigan, no matter what information I input. Confusing and disconcerting. I’ve used many GPS navigation systems over the years, but this is the first time I have been utterly defeated by one.

The power seats are lush and supportive. But while my spouse thought the passenger seat was supremely comfortable, I found the bottom on the driver’s seat lumpy and actually painful after even a short stretch of driving. Maybe it was me (I am pretty boney of butt), and maybe there was something awry with this particular seat because I can’t remember ever driving a Cadillac with anything less than totally comfortable seats. My advice: try before you buy.

Among the technology features on the XT5 Premium Luxury are an array of safety and driver-assistance gear, such as rearview camera, rear cross-traffic alert, side blind-zone alert, lane-departure alert, forward-collision alert, pedestrian detection and front automatic braking.

Pricing for the XT5 starts at $38,500 for the base front-wheel-drive model. The full-zoot luxury, all-wheel-drive test Caddy started at $54,390, with a bottom line of $56,730 once you add on the Chrystal White Tricoat paint job, at $995; shipping, also at $995: and, oddly, a $350 charge for a compact spare tire. The top-drawer Platinum model starts at $62,500, which must really be special since I don’t see how much more stuff you could pile onto this Premium Luxury version.

There’s a lot of luxury to like with the new XT5, which is a good addition to Cadillac’s range of coupes, sedans and SUVs. It’s a solid upgrade from the SRX, and while the styling might be polarizing, it seems that it would appeal to Cadillac’s buyers who typically want to stay ahead of the curve.