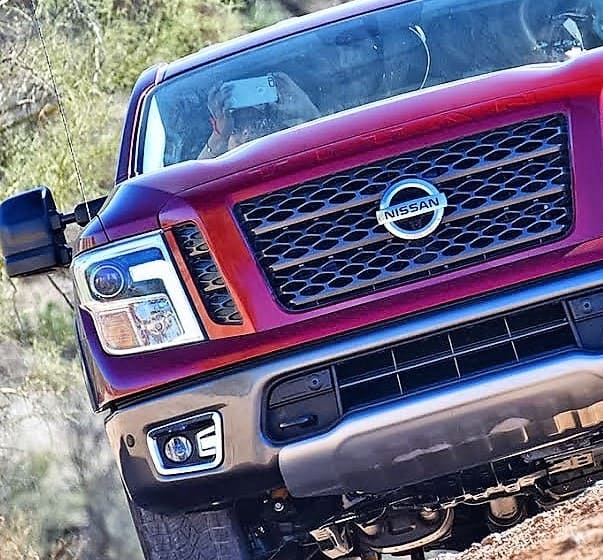 (Editor’s note: Our staff recently did a series of brief drives — either around 30 miles on pavement or on a short but challenging off-road course — in several cars during the media day at the annual Active Lifestyle Vehicle awards program held in the Phoenix area. Here are Bob Golfen’s impressions of four of the vehicles he drove during that program.)

This massive pickup truck was one of the ALV award winners, taking the honors in the Extreme Off Road category.  This was a big victory for the Titan since it unseated the usual off-road champ, the Jeep Wrangler.

The Titan romped through the challenging course in the Arizona desert, but most of my exposure to the crew-cab truck was a lengthy run on the highway.  The trip proved that not only was the all-new Nissan pickup a worthy brute on the trail, it is a gentle giant at high speed on the open road.

This was not my first experience with the Titan, which was completely revamped for 2017.  Earlier this year, I went on a media tour as Nissan rolled out its new product, which first entered the market with a Cummins diesel V8, making it unique among half-ton pickups.  In one part of the tour, I drove a diesel PRO 4X on a rugged trail.

This time, the Titan was outfitted with a 5.6-liter gasoline Endurance V8 with 390-horsepower and 394 pound-feet of torque, up considerably from the previous model.  This smooth-running engine felt effortless in powering the nearly 5,700-pound truck, accelerating briskly and cruising easily at high speed. The engine is hooked up with a seven-speed automatic, which always seemed right on the ball.

As expected, all this size and power comes at a cost, with fuel mileage rated by the EPA at 15 city and 21 highway.

Handling was also first rate for such as large vehicle, making it surprisingly easy to drive. This would great choice for a cross-country trip, especially if you have a camper or some big-boy toys to tow; the Titan is rated at a maximum towing capacity of 9,400 pounds.

The PRO 4X is a well-equipped truck with a fairly luxurious interior that also reflects its backwoods intent.  The Zero Gravity seats are comfortable and supportive, and the cabin is loaded with technology and convenience features.

Nissan has had a tough time breaking into the full-size truck market, which is dominated by the domestic brands.  The Titan was designed with a full-scale assault in mind, and could make some inroads.

Subaru Outback in the Arizona desert

Subaru essentially invented this class of vehicle, all-wheel-drive station wagons built for rougher terrain and inclement weather, what the automaker has dubbed the Sports Utility Wagon.  While not the kind of boulder climber beloved by Jeep owners, the Outback does have enough capability to take you deep into the woods on muddy or rutted roads, or into the mountains for a snowy ski trip.

The Outback seems like a natural for an Active Lifestyle Vehicle, and Subies are indeed favorites among outdoors adventurers.  They are practical and economical cars for daily driving, yet always ready to go on that backwoods trek.

Completely redone for 2017, the fifth-generation Outback has enlarged its cargo space to SUV-like proportions and, like all Subarus aside from the BRZ sport coupe, its comes standard with Symmetrical All-Wheel Drive.  AWD is a major selling point for Subaru, especially among those who live up north and must contend with snowbound conditions.

I drove the Outback on a portion of the ALV off-road course that included a washboard dirt road and a fairly steep climb up an eroded hill.   The Subaru had to skip the portion of the course that plunged into a small ravine, fit only for the Jeeps and four-wheel-drive trucks.  But it proved its mettle in the rest of the drive, remaining smooth, comfortable and unflappable over the bumpiest sections.

This is the kind of off-roading that most drivers do, so the Outback should provide enough exposure to the wild for all but the most-dedicated trail warriors. The Outback felt solid and luxurious throughout the dusty desert drive, and would be a strong option for anyone who needs a superior family car but also wants to be able to go pretty much anywhere.

Volkswagen now has its own entry in the Sport Utility Wagon Class, similar in intent with the Subaru Outback but with a Germanic spin.  Alltrack is all-new for 2017, featuring 4Motion all-wheel drive and undercladding for protection against dirt-road hazards.  Like the Outback, it’s not built for the serious off roaders but for those who want to be able to access out-of-the-way places without getting stuck in mud, snow, etc.

The Golf wagon was formerly marketed as a Jetta in this country but after its recent revamp became a Golf as it is in the rest of the world.  With its turbocharged 1.8-liter four-cylinder engine, the Alltrack has plenty of power along with the kind of nimble handling for which VWs are known.

Alltrack made short work of the less-intense sections of the off-road course, feeling capable and ready for adventure.  The Alltrack’s modest styling might not be to everyone’s taste, but handsome is as handsome does, and the VW does just fine.

VW Golf is sporty and practical

Unlike the Outback, which makes use of a continuously variable automatic transmission for improved fuel mileage and efficiency, the Alltrack is equipped with a DSG dual-clutch six-speed automatic, which is much preferred.  Shifts are quick and seamless, and the transmission was very responsive to throttle input.

I went on a long highway drive in the regular-duty Golf TSI hatchback, one of the most popular vehicles in much of the world outside the U.S.  I’ve always favored these practical-but-entertaining little cars, and this one reminded me why I like them.  It handles like a sports car while still delivering a comfortable ride, and the 1.8-liter turbo four provided quick getaways.

Like the Alltrack, the hatchback was equipped with the dual-clutch trans, which suited it well, although I would more enjoy the six-speed manual setup that will be available next year in the base S model.

The Golf TSI was also an award winner at ALV, capturing the prize for Best Value On Road.  I would have to concur.