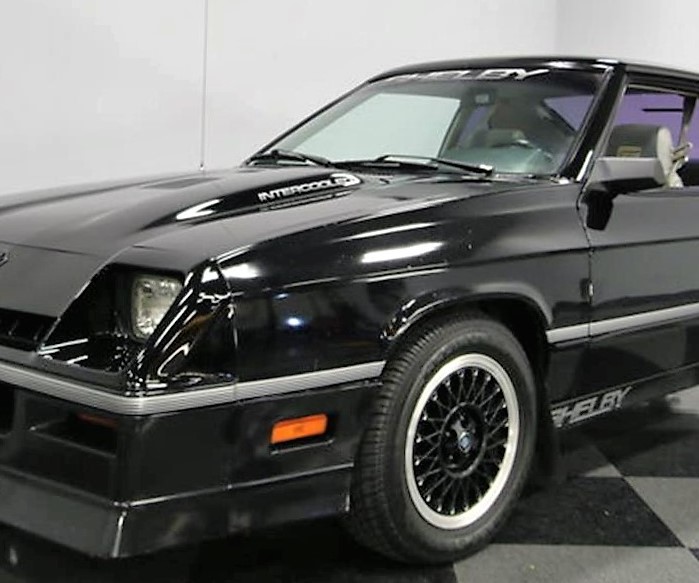 The Dodge Charger / Shelby GLHS is bedecked with dams, scoops, spoilers and the Shelby logo

The Pick of the Day is a genuine, low-mileage Carroll Shelby performance machine with an asking price of just under 7,000 bucks. But no, it’s not a V8-enhanced AC Ace sports car or a done-over Ford Mustang. And to my knowledge, it is part of the only Shelby series with a transverse 4-cylinder engine and front-wheel drive.

This is a 1987 Shelby GLHS, one of 1,000 Dodge Chargers that Shelby purchased from Chrysler Motors and transformed into hot little hatchbacks at his factory in Whittier, California. The effort to capitalize on the Shelby name, and have some fun doing so, came after the previous year’s similar transformation of 700 Dodge Omnis into Shelby GLH models.

The GLHS designation is a very special acronym

In typically subtle Carroll Shelby fashion, the GLH stood for “Goes Like Hell” while the GLHS extended that to “Goes Like Hell S’more.” And nowhere does the car display a Dodge logo, just Shelby emblazoned on the body, the interior and on the engine valve cover, which looks super cool.

This Shelby is a well-preserved original car, according to the La Vergne, Tennessee, dealer advertising the car on ClassicCars.com, with just 30,570 miles showing on its odometer. Wear seems light as seen in the photo gallery with the ad, and the glossy-black exterior looks suitably snarly, ’80s style.

“We’re not asking a whole lot for a genuine Shelby car,” the seller says, and I’d have to agree. “And we suggest you dig deeper into this 1987 Shelby Charger, because this is a rare coupe with a worthwhile pedigree and the right recent servicing to make it the best turnkey bang-for-your-buck you can find.”

The built-in phone is a cool ’80s relic

While it might appear to be merely a gussied-up Charger, the GLHS does have performance mods to back up its racy styling. Under the hood is a turbocharged 2.2-liter engine, conservatively rated at 175 horsepower, coupled with a five-speed manual transmission, which provided sparkling acceleration for this lightweight compact. Published reports pegged the zero-60 time at 6.5 seconds, while the Charger reportedly turned the quarter mile in under 15 seconds.

Shelby also tuned the handling with such additions as Koni adjustable shock absorbers and tweaks to the springs and bushings. The GLHS featured a full load of accessories of the period, such as AM/FM/cassette stereo, power steering and brakes, and a sunroof, as well as sports seats and a full set of gauges.

A kitschy feature of this Shelby is the way-obsolete built-in telephone mounted next to the shifter, once the height of advanced technology, now just a fun conversation piece. Note to the next owner: do not by any means remove it. It’s a funky piece of history.

The asking price for this rare and unusual Shelby is just $6,995, which has to be a standout bargain for such a fundamentally enjoyable and highly drivable little critter. Not to mention the allure of the Shelby magic.