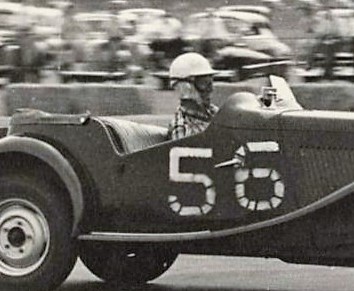 The remarkable life of racer and engineer John Cooper Fitch is reflected in the myriad of items that recently were presented to the International Motor Racing Research Center at the Watkins Glen, New York.

The gift from Fitch’s sons, John, Christopher and Stephen Fitch, significantly enlarges the John Fitch Collection created at the Racing Research Center in 1999, when papers were donated relating to his career as a safety designer and consultant, with particular emphasis on the Fitch Inertial Barrier and the displaceable guardrail. Fitch died on Oct. 31, 2012, at the age of 95.

“The collection reflects John Fitch’s remarkable and varied life as a talented international race car driver, an innovative inventor of road and driver safety equipment, a designer of racing and production cars and an author who shared his exceptional story through his books,” IMRRC archivist Jenny Ambrose said.

“We are honored to serve as the largest historical repository of materials related to John Fitch. He is a critical figure during the exciting years of post-World War II international road and sports car racing.

“His impact is felt outside racing circles through his contributions to road safety and automobile design. We look forward to sharing artifacts and papers that celebrate his life with researchers, visitors to the center and racing fans.”

“Since I started going to Formula 1 races at the Glen in 1964, the preservation of history was obvious to me,” Berman said. “To carry this forward, the IMRRC has developed a world-class reputation, which motivated me to obtain the Fitch archives donated by his family.”

Souvenirs of Fitch’s phenomenal success as a professional driver – including boxes of trophies in the form of silver cups, bowls, platters and plaques marking his victories in more than 20 races throughout his 18 years of racing – arrived at the Center’s storage facility earlier this month.

Fitch became the first Sports Car Club of America National Champion in 1951, claimed a victory at 12-Hours of Sebring in 1953, won his class in Mille Miglia in Italy in 1955, and was awarded a golden jubilee Tourist Trophy at Dundrod in Northern Ireland the same year. He won five major international road races, including the first Buenos Aires Grand Prix in Argentina in 1951.

In addition to his trophies, the Fitch collection contains a series of race files containing photographs, clippings, entry lists and race programs reflecting his participation in almost 140 races on three continents, from the first post-World War II road race at Bridgehampton in 1949 to his last professional race at Sebring in 1966.

A significant portion of the Fitch material now housed on the Center’s shelves documents Fitch’s work as an inventor. Design drawings, technical specifications, patents, testing documents and marketing materials reflect his work on his most well-known innovations, including the inertial barriers made of barrels that protect drivers from dangerous hazards at exit ramps and bridge abutments; the Driver Safety Capsule, a compartment in a race car that surrounds and protects drivers in the event of a collision; and his devices and treatments for improving fuel economy in cars and ships.

The collection also contains Fitch’s proposals and correspondence promoting dozens of design concepts and plans for inventions never developed, including the Fitch Survival Vehicle designed in response to 9/11. Fitch’s involvement with design, development and promotion of racing and production cars is documented by correspondence, technical reports and publicity and sales materials related to the Corvair Sprint, Phantom, Phoenix and Firebird cars.

Fitch shared his remarkable life story through his own writing and through collaboration with other authors. His collection contains numerous drafts of manuscripts as well as correspondence with writers, editors and publishers. His papers capture work in progress on Fitch’s biography Racing Through Life (1993), authored by James Grinnell, and his own writing for his book Racing with Mercedes (2005), recounting his participation as the first American member of the extraordinarily successful Mercedes-Benz race team.

This generous donation from his sons to the Center of an additional 50 cubic feet of artifacts, documents and photographs joins and complements Fitch material in the Center’s holdings acquired through previous gifts from other donors.

In 2000, Fitch historian Berman presented the Center with his detailed research documenting Fitch’s race history, which he compiled as a result of working with Fitch to organize his papers.

“It was an honor to have been John Fitch’s friend and his motorsport historian,” Berman said.

Carl Goodwin, author of They Started in MGs: Profiles of Sports Car Racers of the 1950s, has donated papers relating to Fitch’s career as a safety designer, consultant and advocate. These materials contain extensive correspondence and articles reflecting Fitch’s ongoing involvement with safety issues and product development, including his work on displaceable and compression barriers, his receipt of safety awards recognizing his contributions to the field, and his first press conference on racing safety devices 1996.

Fitch collaborator Ken Berg also has donated a collection of Fitch materials to the Racing Research Center. Berg co-authored papers with Fitch for presentation to the Society of Automotive Engineers in 2006 and 2007.

Most recently, lifelong friend Art Evans, a motorsports writer and photographer, has donated his collection of Fitch articles, materials and photographs.

The Racing Research Center is an archival and research library dedicated to the preservation and sharing of the materials of motorsports, all series and all venues, worldwide. Researchers interested in the Fitch materials and other materials in the Center’s collections can contact Ambrose at jenny@racingarchives.org.

For more about the work of the International Motor Racing Research Center, visit the center’s website.