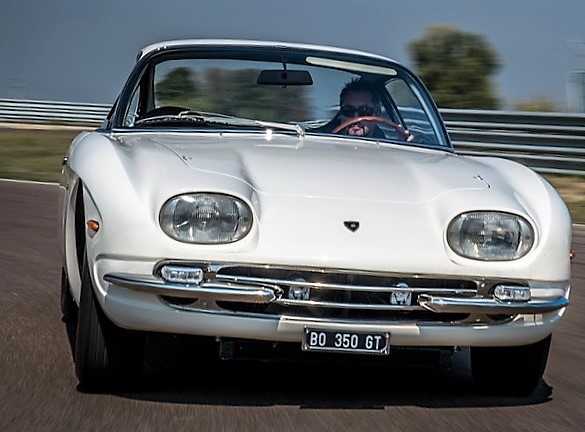 After Ferruccio Lamborghini took up the challenge from Enzo Ferrari to build his own darn sports car, his company produced the Lamborghini 350 GTV, a futuristic 12-cylinder coupe that debuted at the 1963 Turin Motor Show.

The prototype was so futuristic, in fact, that Lamborghini decided to tone it down a bit for the production model, according to the company website. Thus came Lamborghini’s first production car, the acclaimed 350 GT, a 320-horsepower touring car of the highest order, and still futuristic enough to cause a sensation.

There were 15 350 GTs built in the first run, and now Automobili Lamborghini has taken one of those first-generation cars and returned it to its original glory with a year-long restoration. The meticulous work on the historic car, chassis number 0121, was performed by the company’s Polo Storico (historic hub) division of Sant’Agata Bolognese in northern Italy, the company birthplace.

The facility is stocked with the company archives that were used to accurately reconstruct the coupe, which was originally handmade with no two of the first 15 exactly alike. Overall, the work took nearly 2,000 hours on the body, interior and mechanical components. Polo Storico used authentic parts for the restoration to ensure accuracy, according to the division, with some unique parts being restored rather than replaced. Even the Blaupunkt radio that was installed by the original owner was retained and brought back to working order.

Fittingly, the unveiling of the restored first-gen Lambo took place on a race track, the Autodromo di Modena near Sant’Agata Bolognese, where a special ceremony celebrated the completed restoration. The white coupe was driven 50 miles on the track by the current owner while the original owner watched from the sidelines.

The 350 GT is the fourth restoration of a historic Lamborghini by Polo Storico, which also has brought a Miura, Countach and LM002 back to original condition.

The company’s historical division is actively engaged in the preservation of classic Lamborghinis, managing the archives, certifying vintage examples and providing authentic spare parts, as well as taking on complete restorations.