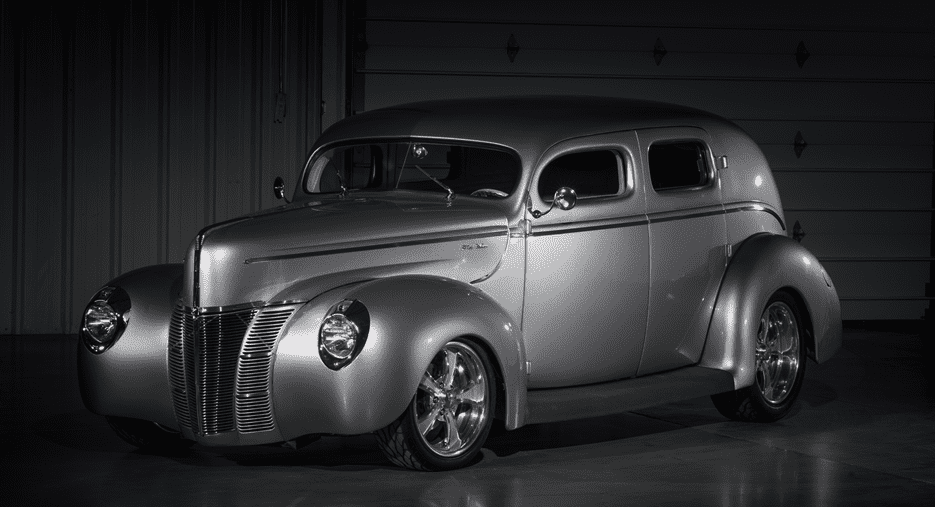 Editor’s note: This is the 22nd in a 30-day series featuring cars from the Tammy Allen Collection to be sold October 13-15 at Barrett-Jackson’s 2016 Las Vegas Auction.

From the Tammy Allen collection and set to cross the block without reserve during the Barrett-Jackson Las Vegas option is this 1940 Ford Deluxe custom sedan, which was originally customized in 1994 and nicknamed “My 40 Limo” by the two friends who created it in their two-car garage in Fresno, California.

In 2007 the car was modified to appear as it does today in champagne silver while still retaining its all-Ford, all-steel body and drivetrain.

The Ford Deluxe body sits atop a powder-coated frame and the car makes use of a Mustang II front end and 9-inch posi-traction rear end to supply power from the polished 427 Ford engine, which is rated with over 425 horsepower and over 500 pound-feet of torque and is mated to a four-speed automatic transmission with overdrive.

The wheels work to highlight the elegant body lines and body modification the Ford Deluxe received, which include a four-inch chop, shaved handles, the taillights have been frenched in, and suicide rear doors.

The interior features Italian leather by Finish Line Interiors of San Jose, California, and was blanketed with Dynamat for noise reduction.

Other highlights include a radio speaker grille that hides a set of Vintage Air conditioning controls, Lucky 7 remote operated windows and trunk, shaved ashtrays, a console between the front seats, an Alpine stereo system, tinted windows and key-less start.

This 1940 Ford Deluxe custom sedan and the rest of the Tammy Allen Collection will be crossing the block at no reserve as part of Barrett-Jackson’s ninth annual Las Vegas Auction, October 13-15 at Mandalay Bay Resort & Casino. For more information, visit www.Barrett-Jackson.com/Bid or call 480-421-6694. Absentee bidding options powered by Proxibid are also available.