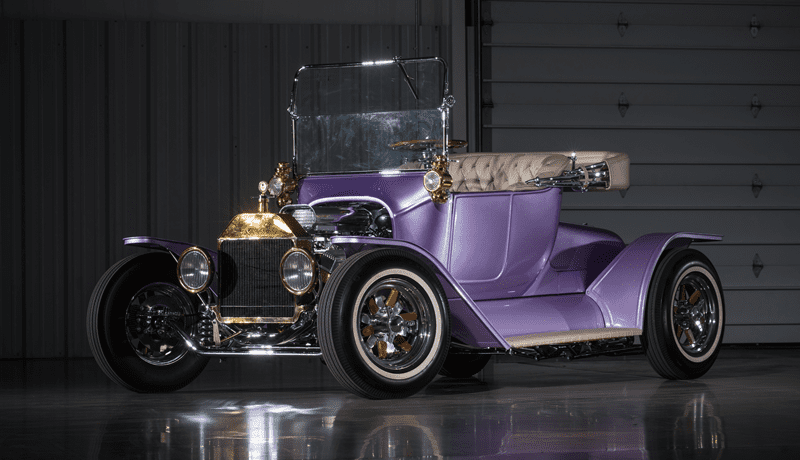 Editor’s note: This is the 18th in a 30-day series featuring cars from the Tammy Allen Collection to be sold October 13-15 at Barrett-Jackson’s 2016 Las Vegas Auction.

Introduced in 1908, the Ford Model T was hand-built until 1914 when it was then made on a moving assembly line. By 1927, Ford had produced over 15 million rugged and affordable Model Ts, the record holder for a single-model produced until 1972, while the model became known as the car that put the world on wheels during the course of its 19-year production run.

With so many Model Ts available after production ceased and affordably priced several decades after, the Model T became a popular platform for hot-rodders to build T-Bucket customs.

Offered during Barrett-Jackson’s Las Vegas auction from the Tammy Allen collection without reserve is a custom 1913 Ford Model T that was designed by Don Tognotti and Gene Winfield. The build process began in 1962 and took place over a two-year period, with the result of their efforts dubbed “King T.”

The car became known for its unique styling, paint and extensive chroming of mechanical features. The car earned numerous awards at events such as the Winter Nationals Auto Fair and the Oakland Roadster Show, and it is recognized as a 1964 AMBR trophy winner. The King T became so well-known that it was immortalized as a model kit and inspired the Hot Wheels “Hot-Heaps” Roadster.

When the car was originally shown in the ’60s, the engine featured Hilborn fuel injection, although it has since been replaced with a simpler carburation system. The car was fully restored to its former glory in 2007, with Gene Winfield even re-creating the original Lavender Pearl paint for the restoration.

Other build highlights include a tubular frame with independent rear suspension, with power produced by a Chevrolet 327 cid V8 mated to a Hydramatic transmission. The transmission is controlled by the original Model T spark advance and throttle controls on the steering column.

This 1913 Ford Model T custom “King T” roadster and the rest of the Tammy Allen Collection will be crossing the block at no reserve as part of Barrett-Jackson’s ninth annual Las Vegas Auction, October 13-15 at Mandalay Bay Resort & Casino. For more information, visit www.Barrett-Jackson.com/Bid or call 480-421-6694. Absentee bidding options powered by Proxibid are also available.