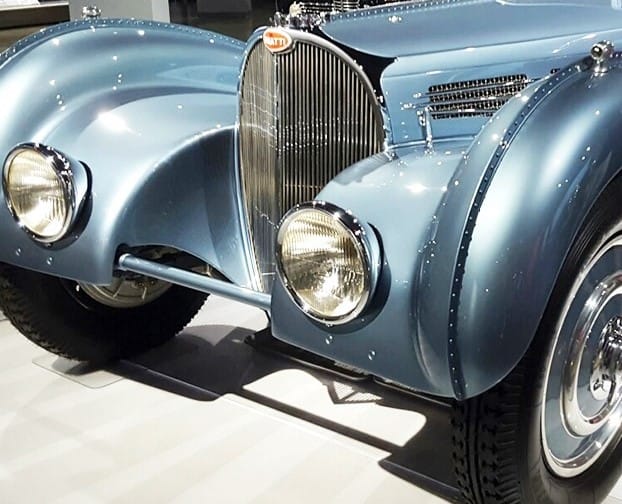 The Arizona Concours d’Elegance, a celebration of fine automobiles at the historic Arizona Biltmore Resort, has announced that the magnificent 1936 Bugatti Type 57SC Atlantic coupe from the Mullin Automotive Museum will be shown at the Concours on January 15, 2017.

One of the greatest automotive jewels of the Art Deco era, the Bugatti Atlantic will star in a special class of Bugatti automobiles, adding its elegant form to the Art Deco ambiance of the Arizona Biltmore, which was completed in 1929.

The Atlantic is the most-famous creation of Jean Bugatti, the artist/engineer son of company founder Ettore Bugatti, who applied the gracefully flowing lines of his design aesthetic to an automobile that also evokes aeronautic and industrial forms.

This beautiful coupe owned by Peter Mullin and Rob Walton, chassis number 57374, was the first of four Atlantics built by Bugatti, and originally sold to Victor Rothschild, 3rd Baron Rothschild.

“To have one of the most recognized classic cars in the world present on the Biltmore’s inner courtyard is a wonderful opportunity for those who cherish the art and style of the automobile,” said Ed Winkler, co-director of the Arizona Concours.  “The car is pure art in motion, and guests will have the opportunity to see this extraordinary, and rarely seen, automobile at the Arizona Concours.”

As with each of the Atlantics, 57374 wears the unique riveted body panels first seen on Jean Bugatti’s groundbreaking 1935 show car, the Aérolithe Coupe, whose magnesium and aluminum body panels defied welding so were instead riveted along raised external seams.  This evocative treatment was carried over to the Atlantics, although their bodies are formed entirely out of aluminum.  The sharply defined ridges curving over the fenders, roof and rear aspect will forever be associated with Jean Bugatti’s masterpiece automobiles.

“At the height of the Art Deco movement, the refined look of certain machines elevated them to the level of museum objects,” the Mullin museum says in a description of this signature automobile. “In Jean Bugatti’s Atlantic, Picasso had met his match.”

The Arizona Concours d’Elegance hosts its fourth annual gathering on the landscaped lawns of the Arizona Biltmore on January 15, 2017, with more than 90 exceptional vintage automobiles on display and competing for awards in more than a dozen classes as well as special awards. The featured classes for 2017 honor the Cars of Ettore and Jean Bugatti, Lincolns of the Classic Era and Coachwork by Vignale.

All net proceeds from the nationally recognized Arizona Concours, as well as generous donations from participants and spectators, will benefit Make-A-Wish® Arizona, the founding chapter of the international organization that grants wishes to children with life-threatening medical conditions.

For more information about the 2017 Arizona Concours d’Elegance, visit the concours website.