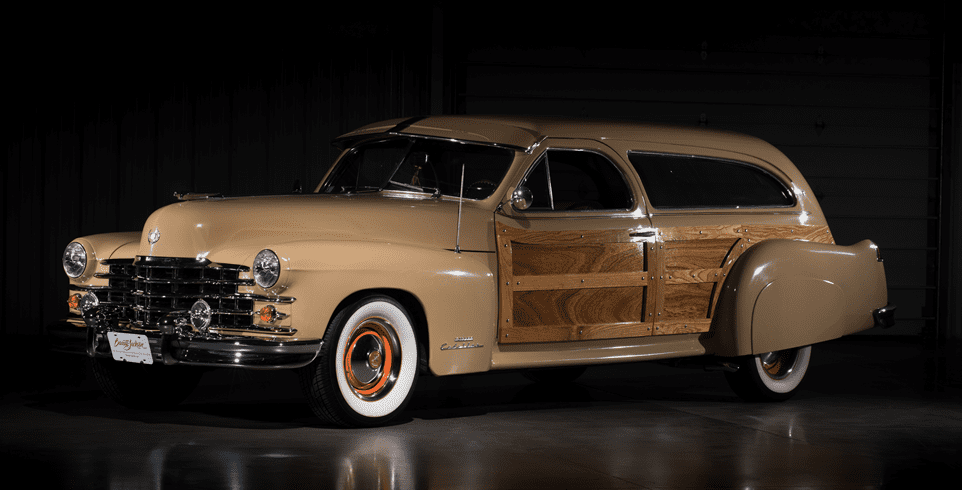 Editor’s note: This is the 15th in a 30-day series featuring cars from the Tammy Allen Collection to be sold October 13-15 at Barrett-Jackson’s 2016 Las Vegas Auction.

Offered from the Tammy Allen collection without reserve, set to cross the Barrett-Jackson Las Vegas auction block, this 1947 Cadillac began its life as a Miller-bodied hearse before it was transformed into a custom woody wagon.

To create the wagon, the body and frame were shortened 29 inches, the original top skin was replaced with that of a 1957 Chevy wagon and the top was lowered by three inches at the front drip rail and two at the rear. Other body modifications included a set of 1949-style fins and taillights, four and a half inches were sectioned out of the body, and the one-piece rear door was cut to make a two-piece clamshell rear hatch that is more station wagon-like.

The exterior wood has been done in period style with ash framing and mahogany panels, and the woody theme has been carried over to the leather interior, which is paneled with oak and birch and kept cool with a Vintage Air system. All wood has been finished with spar urethane and the metal has been given multiple coats of light buckskin acrylic lacquer.

Powering this car is a 429 engine sourced from a 1967 Cadillac Fleetwood Brougham. The transmission, front suspension and rear axle were also used from the Fleetwood to create this one-of-a-kind car.

Other highlights include power steering and power brakes.

This 1947 Cadillac custom Woody Station Wagon and the rest of the Tammy Allen Collection will be crossing the block at no reserve as part of Barrett-Jackson’s ninth annual Las Vegas Auction, October 13-15 at Mandalay Bay Resort & Casino. For more information, visit www.Barrett-Jackson.com/Bid or call 480-421-6694. Absentee bidding options powered by Proxibid are also available.