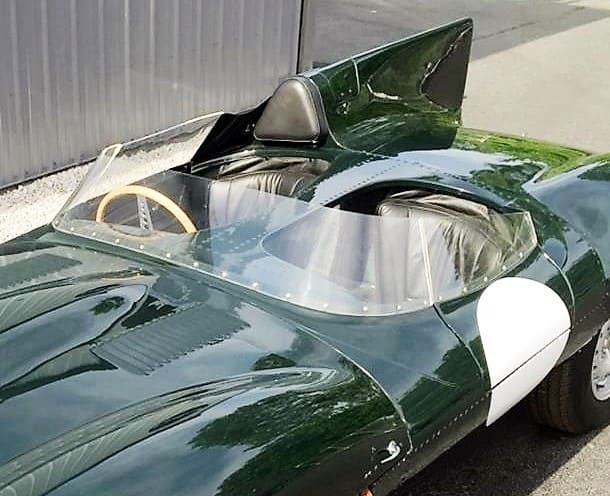 Many of us are still shell-shocked by the monumental prices fetched by the top cars at the Monterey Car Week auctions, with seven selling for more than $10 million. These include the top sale of the week, that of the historic 1955 Jaguar D-type roadster that won the 24 Hours of Le Mans in 1956 and went to a new owner at RM Sotheby’s auction for a stunning $21,780,000 (including fees).

Now that’s a chunk of change, which 99.9 percent of us would be hard-pressed to pony up. The Pick of the Day offers another, more-affordable route for those who would like to celebrate the majesty of Jaguar’s fabulous endurance racer, just not with an eight-figure price tag.

Sure, the 1955 Jaguar D-type offered by a Sylvania, Ohio, classic car dealer is a modern replica with a fiberglass body, but consider the fact that the asking price is $52,900, around 411-fold less than the auction result for the real Le Mans-winning Jag.

Not all actual D-types are worth that of the historic preserved car that set the record in Monterey, scoring as the highest-priced British car ever sold at auction. Most sell in the range of $2 million or $3 million. But certainly not the $52,900 that this “Tupperware” version is going for.

The dealer advertising the replica for sale on ClassicCars.com says part of the reason why the replica D has a modest asking price is because the build has never been completed. The car is said to be nearly there, with a 3.8-liter Jaguar engine fed by triple Weber carbs installed but not hooked up, running gear in place and some of the interior present. The body has been painted and the trim put on.

There are no specifics about what has to be done to finish the car, but the impression is that it could be accomplished by a handy owner. Most parts needed for completion come with the car, the ad says, though some stuff would have to be sourced.

“The only opportunity I have ever seen in the states to get a fantastic D-type replica for the right price that only needs finishing,” the dealer says. “It is a sad circumstance how many people have a nearly completed project that stalls, but those are fantastic opportunities for the next guy.

“This D-type replica has all correct Jaguar running gear and suspension. The engine is a clean 3.8 with side-draft Weber carburetors and the gearbox from the V12 XK-E. Correct Dunlop wheels are a must, as well as the proper gauges laid out correctly.”

Once the car is finished, the buyer would be the first driver of the essentially new D-type, which would have to be loads of fun to fling around. Sure, those snooty Jaguar collectors might look down their noses at your replica car, which not only has no racing history but no history at all.

But you could be driving down the road in this visually accurate D-type replica and look like a million bucks, or possibly many millions, without your wife nor your accountant threatening to have you committed.