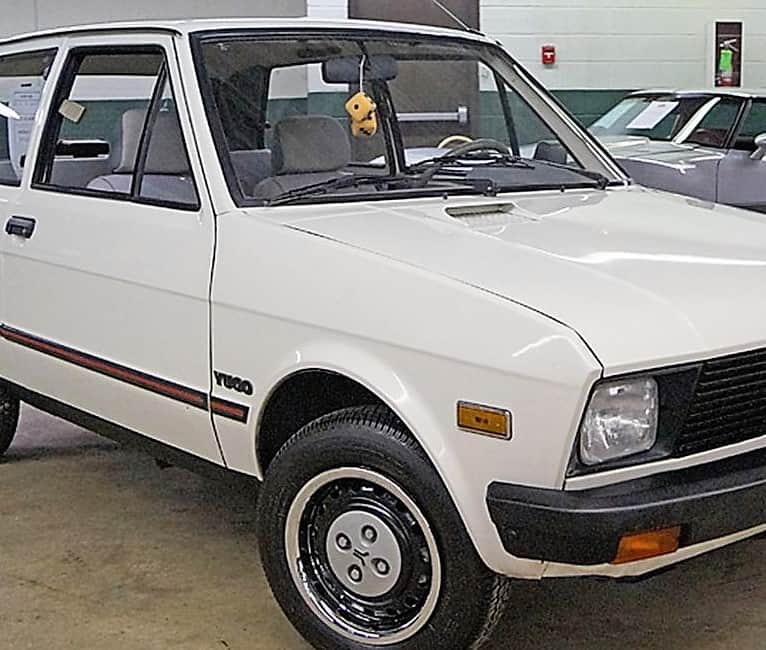 With Monterey Car Week coming up, and all the crazy-money collector cars that entails, I was inclined to choose something suitably opulent for Pick of the Day.

But my contrarian nature took over and I’m going in the other direction with the least-likely car to be found on the lawn at Pebble Beach, a 1988 Yugo GV in glowing appliance white. OK, there is the Concours d’LeMons that also happens next week, which celebrates the very worst in automotive shlock.

The Yugo being advertised on ClassicCars.com by a Canton, Ohio, car dealer actually looks pretty nice despite the 88,000 miles on its odometer, which is a lot further than I thought these teeny hatchbacks ever made it. Even the interior, such as it is, looks clean and intact. Although this was apparently a “radio delete” model that appears to have a hole in the driver’s door panel where a speaker would be.

The dealer shows a sense of humor via a pair of yellow fuzzy dice hanging from the rear-view mirror.

Ever since this Eastern Bloc version of the Fiat 128 landed on our shores in 1986, it’s been lambasted as the most terrible car ever, a veritable penalty box of faulty parts and whacky drivability. They disappeared into mounds of rubble fairly early on, and I could not tell you the last time I actually saw one on the road moving under its own power. Many years, really.

So that makes this clean survivor extra special.

“These cars drive better than one might expect, with 4-wheel independent suspension, and rack and pinion steering,” the dealer says in the listing.

The wee three-door is powered by a 1.1-liter inline-4 that generates 55 horsepower hooked up with a four-speed manual transmission. Not sure whether these were ever offered with automatic, though I strongly doubt it. The car has an “excellent body and paint finished in the original snow white,” the dealer says, though there is no indication whether it has been repainted. But who would repaint a Yugo?

This is the second time the dealership has owned this car, the ad says, and the last time “interest was strong” and it sold quickly. “So we doubt it will last this time either.”

The asking price is a solid $7,495, which might seem like a lot for a car that originally sold for $3,000 and doesn’t really have much collectability value. But to find a Yugo in decent condition, even with substantial mileage, is indeed a rarity and could attract the kind of quirky collector who goes for minicars, oddballs and the like. Look at how BMW Isettas have taken off.

If you hurry, you could pick up this Yugo for Monterey’s classic car week, and while it might be too nice for LeMons, you could consider it for display August 17 at The Little Car Show in nearby Pacific Grove, which is generally awash with some of the strangest contraptions on wheels.