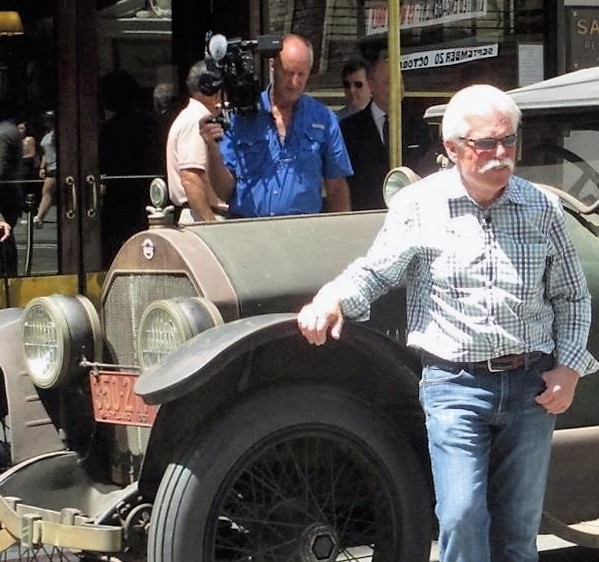 It’s hard to get the attention of New Yorkers, especially those who work near Times Square where almost-naked people and costumed characters wander the streets to hardly a notice. Nonetheless, unload a 1921 Stutz Bearcat on 42nd Street just off Times Square and people gather four deep to take photos.

That’s what happened Wednesday as the aesthetically aged Stutz was unloaded and parked in front of the historic Sardi’s restaurant. The car’s owner, Wayne Carini, star of Velocity’s Chasing Classic Cars, brought it to the Big Apple to go with his speaking appearance at the July meeting of the Madison Avenue Sports Car Driving and Chowder Society.

The Chowder Society is a car club that has been meeting for lunch at Sardi’s for nearly 60 years. Carini was making a return appearance to talk about his life as reality TV star and to make a special announcement to the gathering of club members and guests, collectively called Chowderheads.

The news is that Carini is selling the Stutz. The car was covered extensively on the TV show as he found it in an amazing state of preservation in a barn in Georgia. The car had sat untouched since 1931, 85 years of unmolested storage.

Carini got the car running and has shown it at Pebble Beach, where it won for the best preserved car, and at the Greenwich Concours d’Elegance, where it won the Journalists Award for being the most story-worthy car on the field.

The car has been consigned to the Bonhams Quail Lodge Auction in Carmel, California, which takes place August 19 as part of the Monterey car week events.

After the lunch appearance at Sardi’s, the car was moved to the lobby of Bonhams New York headquarters, where it will be on display until it is transported west for the auction.

Jed Rapoport
Jed's father's life long passion for old cars was passed to him, and at the tender age of three weeks he attended his first car show, the AACA Fall National meet in Hershey. Jed is an MC at the Greenwich Concours d'Elegance and judge at several other events. Jed has authored several books on cars and collecting and is considered an authority on the subject of Smith and Briggs & Stratton motor wheels and the vehicles they powered.