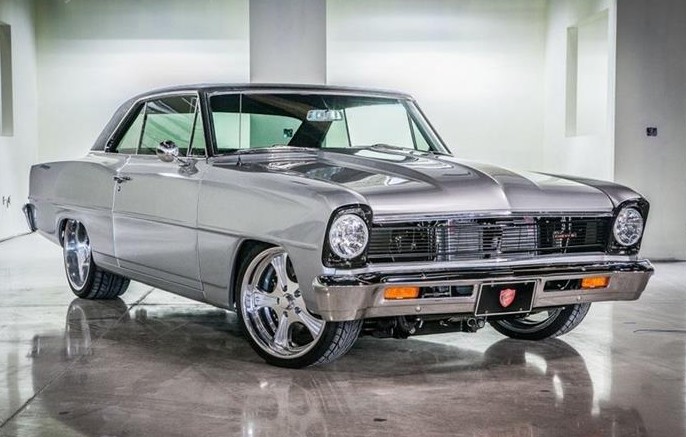 The Chevrolet Chevy II, commonly recognized as the Nova, was purpose-built to give buyers a simple, back-to-the-basics compact car. It was produced from 1962 through 1979, and the nameplate was brought back for a brief time during the ‘80s.

The second generation of the Chevy II began in 1966 and featured a sharp-edged restyle that included a bold grille with single headlights, a semi-fastback roofline, angular rear end and vertical taillights. Top-of-the-line models featured the Nova nameplate that ultimately would replace the series name in 1969.

The Pick of the Day, a 1966 Chevrolet Nova, is both sleek and glamourous, having benefited from a rotisserie restoration and performance mods.

According to the listing on ClassicCars.com, all of the body moldings, stainless trim and gas cap were removed to achieve a smooth look that is enhanced by Mercedes-Benz metallic-sliver paint complimented by a black vinyl top and custom black interior.

The Nova is powered by a 406 cid engine fitted with Trick Flow aluminum heads mated to an Elite TKO-600 5-speed manual transmission with a hydraulic slave cylinder for what the seller called “easy shifting.”

“Power hits the pavement through a Ford 9-inch rear end with posi-traction,” the seller adds.

The car’s custom suspension system consists of “a TCI M2 sub-frame with coilover shocks with power rack-and-pinion steering and a CPP four-link rear with coilover shocks,” the seller says. “It has a complete Wilwood power braking system consisting of six-piston calipers up front and four-piston calipers in rear.” The brakes are tucked behind a set of custom Intro wheels, 18-inches in the front and 20-inches in the rear.

The odometer reads 226 miles, which the seller says are test miles driven upon completion of the build, which is offered in Chatsworth, California, for $88,888 by a dealership.

Ton view this listing on ClassicCars.com, see Pick of the Day