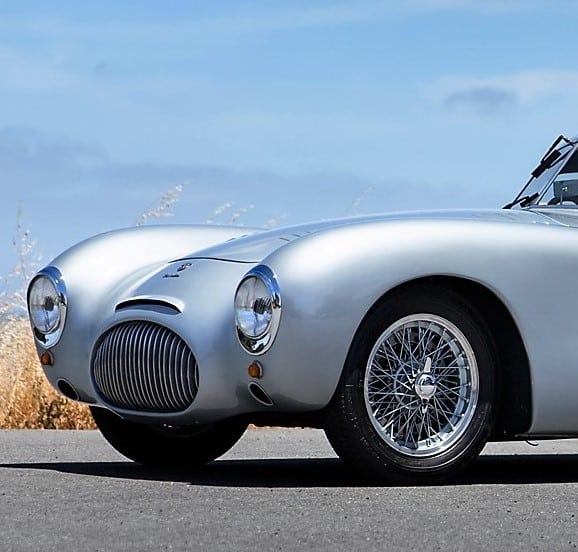 Among the rare and unique one-off cars will be those from Aston Martin, Cisitalia, Ferrari, Alfa Romeo, Mercedes-Benz from the 1930s through the 1960s.

“These automotive treasures represent coachbuilding at their finest from renowned European designers,” said David Gooding, president and founder of Gooding & Company, in a news release. “We feel privileged to offer this unique opportunity for our clients to own a historic piece of automobile design from an era of exceptional Italian craftsmanship.”

Highlights of the coachbuilt collection include:

1946 Cisitalia 202 CMM (Coupe Mille Miglia) by Vignale (pre-auction value estimate: $2 million to $3 million) – “One of the most striking examples of streamlined coachwork and a testament to the brilliant collaboration between engineer Dante Giacosa, designer Giovanni Savonuzzi, and coachbuilder Alfredo Vignale,” Gooding says in its vehicle description.

The CMM was built for endurance racing with an advanced chassis design and Fiat 1100 powertrain. This car was entered in the 1948 Mille Miglia by the factory team and driven by the Piero Tarrufi and Domenico Rabbia.

1954 Aston Martin DB2/4 Spider by Bertone (value estimate: $3 million to $4 million) – Part of the efforts by the colorful S.H. “Wacky” Arnolt to create custom bodies for British cars designed for the American market, the DB2/4 provided an ideal sporting platform for Bertone to work its magic, as it had for other Arnolt projects.

Three were produced with this distinctive body style by Bertone, and this one is the sole Deluxe Competition Model Spider, featuring chrome trim, full windshield and luxury interior. The car was presented at the New York Auto Show with the goal of impressing Aston Martin’s owner and chief, David Brown.

“The shape was developed utilizing the wind tunnel at Turin Polytechnic University, with the sole goal being to create a car that would break the world record for highest sustained speed over the longest period of time,” according to the auction description. Boasting a slippery drag coefficient of just 0.20, the streamliner set nine world records, including 10,000 kilometers with an average speed of 118.7 mph and 72 continuous hours at an average speed of 116 mph.

For information about Gooding’s sale at Pebble Beach, visit the auction website.