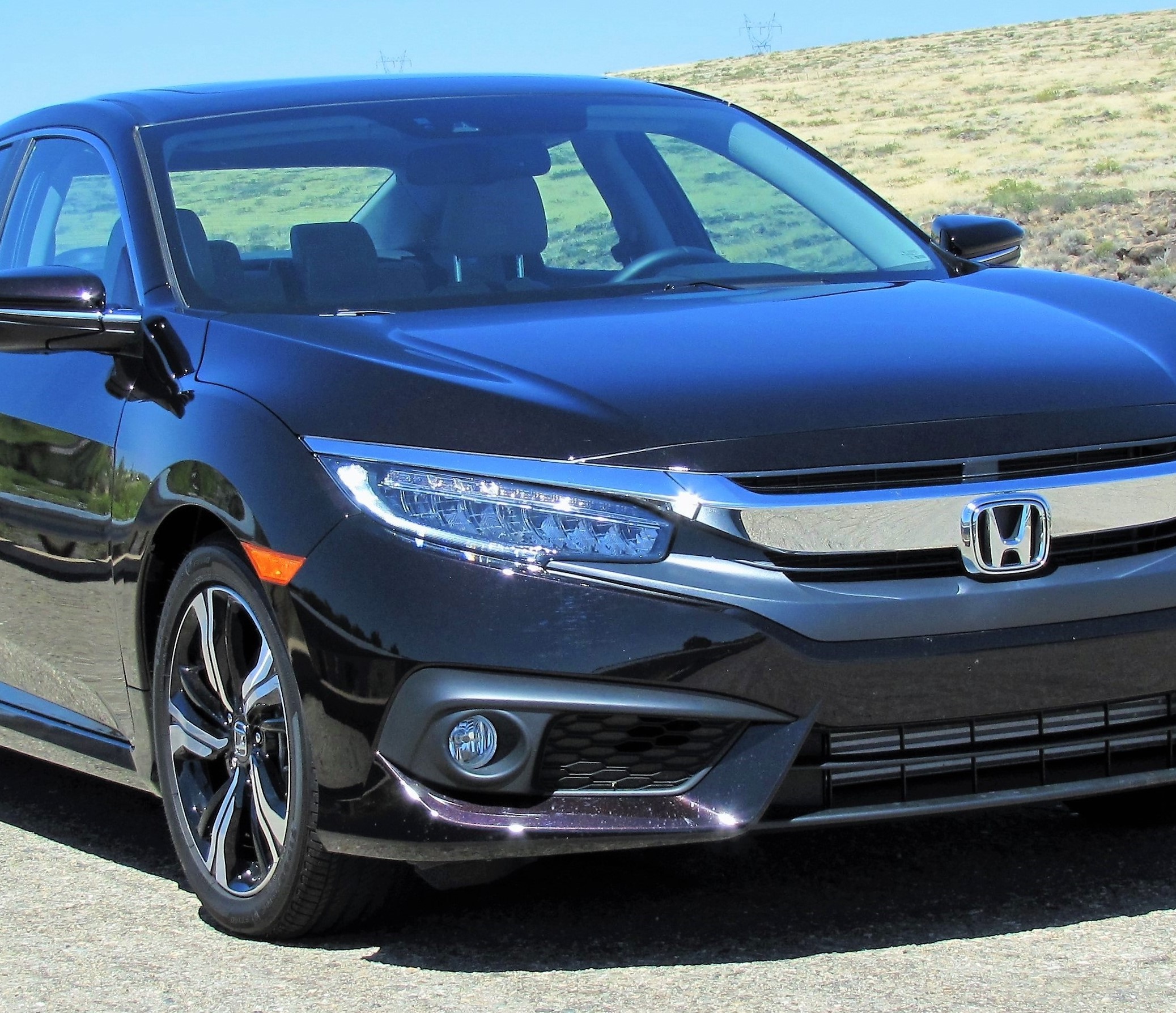 Welcome back, Honda Civic. All is forgiven. The all-new 2016 Civic sedan proves to be a clean-slate redo that fixes the things that bothered me about the last couple of generations while introducing a whole new level of quality and responsiveness.

This is the 10th generation of Honda Civic, which first arrived in 1973 as a tiny runabout that was good on gas. Then came the “hot hatch” years when the sporty little hatchback was beloved by performance tuners and economy freaks alike.

I’ve not been too impressed with the past few generations, which seemed to lose the sporty edge of the earlier ones. Not to even mention the whacky, two-tiered dashboard of the most-recent outgoing model, which was ugly and dysfunctional.

The 2016 Civic felt right from the get go, the top-end Touring model that I drove powered by the sharp pull of a 1.5-liter turbocharged four-cylinder engine, steering that was firm instead of overboosted as in past Civics, and handling that was agile and resilient. The sedan has gained a more-substantial feel, more presence on the road and more agreeable feedback to the diver.

The continuously variable automatic transmission is not ideal, though it does seem to hook up fairly well in sport mode without too much obnoxious engine whining. Only the lower-trim Civics powered by the 2.0-liter naturally aspirated four can be had with a six-speed manual, which is a nice setup from what I’ve read. But it would be good to have stick available for the sportier turbo engine, something on which Honda vows is in the works.

A quick drive on a steep and winding mountain highway proved that the new Civic has moved it up a notch, its power and stability throwing it into competition with more-pricey sport compacts. It may not be the fastest, but its overall performance is right up there. And besides its modest price tag, the Civic averages 35 mpg, according to the EPA.

The new Civic also received a boost in refinement, with wind roar essentially absent at highway speeds and road noise kept to a minimum. The ride quality and stylish interior had me checking to make sure I was still driving a Honda and not some more-exclusive brand.

The exterior styling is way more distinctive and aggressive, as if Honda’s designers had all decided, “Let’s stop playing it safe and go for the gusto.” The result is a Civic that looks chiseled and muscular, with a strong design up front (including LED headlights standard on the Touring model), bold hood and fender bulges, and a sleek coupe-like roofline.

The rear treatment is definitely distinctive and could provoke some controversy – I’ve already read some “vampire” comments – but it’s much improved over the generic look of the past few models. Different is good in this case.

The test Civic looks black in the photos, but it’s actually a deep metallic maroon that glistens in the sunlight. Very effective with the chrome accents of the Touring model.

The Touring’s interior is luxurious and well-equipped, more so than you would expect in this price range, with nice materials and well-integrated shapes. The dashboard and gauges are a vast improvement over the previous model’s, but a bit too colorful for my taste. I would want to tone down their vibrancy.

The video-screen interface works OK, although the touch screen is distracting and bothersome, requiring extra steps for such simple tasks as changing the fan speed or switching radio stations. But I’m sure it’s something to which an owner would become accustomed. The 10-speaker premium audio system sounded terrific.

Civic is a bit longer and wider for 2016, and the interior gains are noticeable. This too-tall driver got some extra legroom and the back seat is habitable by regulation-size adults. The trunk is also roomy, and the rear seat folds down for carrying long objects. Despite its increase dimensions, the 2016 Civic is lighter than the outgoing model because of greater use of high-strength steel.

The new platform has been made stiffer, Honda says, which improves handling. There are also such electronic helpers as Agile Handling Assist, which adjust power to front wheels and braking all around to sharpen fast cornering, as well as Vehicle Stability Assist.

The Touring also came with a suite of electronic safety gear called the Honda Sensing Package with features that are all new to Civic and some that are new to Honda. The package includes Collision Mitigation Braking System, Forward Collision Warning, Lane Departure Warning, Road Departure Mitigation, Lane Keeping Assist System and Adaptive Cruise Control.

Another interesting feature is Honda Lanewatch, which uses a camera mounted on the passenger-side mirror to display on the video screen a sweeping view of whatever’s next to you at the push of a button. It works quite well but seems kind of redundant considering that the mirror is right there. But with that and all the other warning sensors, you have no excuse for running into anything.

The interior has Honda’s typical thoughtful features, such as a configurable console with loads of storage space, plus attractive design that looks modern without being too gimmicky. The Touring has such features as leather seats, steering wheel and shifter; dual-zone climate control; Bluetooth; seven-inch display screen; full-featured audio with satellite and Pandora functions; text messaging; and automatic remote door locks and push-button start.

Much of the appeal of the new, improved Civic is that Honda held the line on pricing. The base sedan starts at just $18,640 while the attractive sports coupe begins at $19,050. The Touring model I drove, which comes complete with all the trimmings, came to just $27,335 including shipping for a very well-equipped and fairly luxurious compact car.

And by compact, don’t get the idea that this is any kind of little econobox. Civic has grown from those minicar days into a full-fledged family sedan, with the Honda Fit taking over as the smallest member of the family.