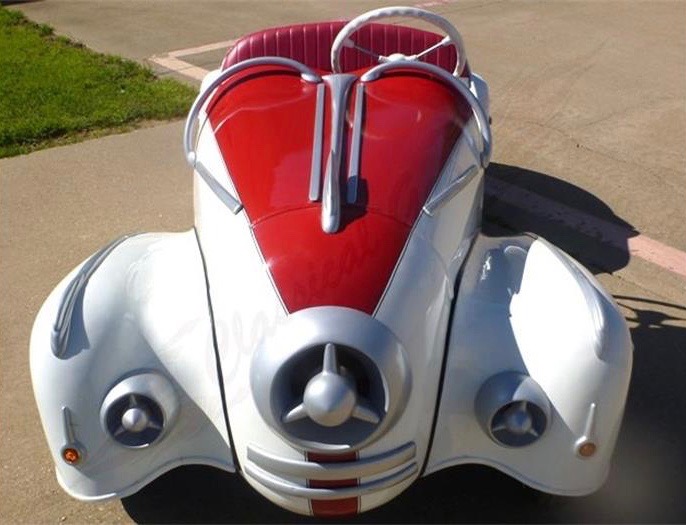 Originally built for use in amusement parks, today’s Pick of the Day, a 1954 Ihle Schottenring microcar, was part of the fleet at Six Flags Over Texas, according to classic car dealership in Arlington, Texas, that is advertising the car on ClassicCars.com.

“These cars are rarely ever seen and even less are being offered up for sale,” the seller notes in the ad. “A few have been sold through auction in the past and one just like this was once featured in The Bruce Weiner Microcar Museum.”

The restoration included the installation of a new Briggs & Stratton engine, which starts with a pull cord. The ad notes that many of these microcars needed to be push-started, so the pull cord start is more convenient for actual usage. The ad notes that the rear spare tire cover opens to access the engine, but for full access the entire tail section of the car tilts rearward.

The interior has a bench seat.

The ad suggests the microcar would be a great way to travel within a car show or swap meet.

The seller says brothers Thomas and Frank Ihle of the Bruchsal district of Karlsruhe manufactured racing cars, including a competition version of the BMW Dixi built under license. The seller also notes that it may have been the Ihles who created the double-kidney grille design for BMW.

After World War II, the brothers built amusement park rides and that there were two versions of the Schottenring, which was named for a race track in central Germany.

“Schottenring cars were available with two different types of front-end sheet metal, in order to give the impression of greater variety in their amusement park setting,” the advertisement notes.

“Several different engines were used, typically a 125-cc single-cylinder, two-stoke Hirth unit of 7 hp,” the ad says. “There was neither transmission nor suspension – axles were hard-mounted to the vehicle frame. Steering was by rack and pinion, and cable-operated brakes were furnished for the rear wheels only. The tires were 4.008 pneumatics of the type commonly found on wheelbarrows.”

The ad notes that a fully restored example brought $41,400 at the Weiner auction three years ago.

“This is a really fun special interest classic that puts a smile on the face of anyone that has seen it. Some call it a Microcar, some bumper car, and others a clown car. No matter what you call it, the car always gets attention and is a hit wherever it goes.”