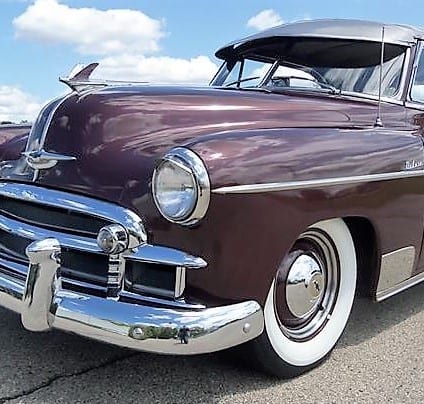 What was up with the latest Hagerty graph, which showed the quickest sales rates for collector vehicles listed on online classifieds? There were several surprises in that top 10 list, but none more unexpected than the sales success of 1949-52 Chevrolet Stylelines, which came in at No. 2.

The Pick of the Day could help answer the question. It’s a 1950 Chevrolet Styleline two-door hardtop that has been tastefully updated with modern Chevy components, and its stylish profile goes a long way in explaining the enduring popularity of these cars among collectors. Not to mention their popularity for transforming into classic lowriders.

What a great roofline

This Chevy listed on ClassicCars.com has been given the resto-mod treatment, which involves leaving the body and trim largely intact as original while installing modern drivetrain components. In this case, a 350 cid V8, 350 automatic transmission, 2.75 rear from a Camaro, power brakes (though still drums) and a 12-volt electrical system.

The idea is to maintain the look of the vintage car but with the drivability of a modern vehicle. This one looks particularly cool with its optional sun visor and all of its lavish chrome trim remaining. The hardtop roofline is too cool. The only outward signs that the Chevy has been messed with is its lowered stance and dual exhaust outlets.

“These cars are exceptionally stylish,” the Jefferson, Wisconsin, dealer says in the listing. “They have such a great look when the windows are down. There weren’t many built, thus they don’t come up for sale often.

“One of the challenges is drivability,” the seller adds. “The old Stovebolt six was a decent engine, but these cars weren’t built for today’s traffic pace… Now the car will go down the road smartly. It rolls along with ease. Plenty of power and torque.”

The dealer goes on to describe the car as a “sleeper” with a solid amount of straight-line performance. The odometer shows just 2,000 miles, apparently since restoration. The body, chrome and paint are holding up fairly well, the seller says, although some flaws and wear relegate it to the status of a 10-footer.

The asking price seems quite reasonable at $13,995 for a car that can be driven anywhere while gradually bringing it up to the next level of condition. Definitely a lot of style for the money. It should sell quickly.