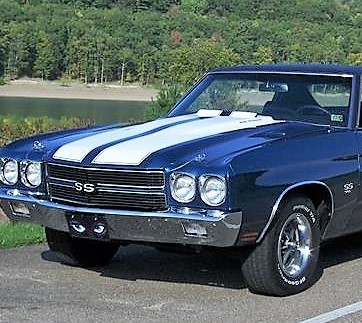 The idea of a project car can be very alluring: you obtain a blank canvas that can be transformed into the car of your dreams, be it highly modified or bone stock. For some, the glamour is short-lived as funds dry up or attention is lost during the often years-long process of restoration. Others withstand the challenges and complete their project cars exactly as they had envisioned them.

The product of a private seller’s project dream, the Pick of the Day is a 1970 Chevrolet Chevelle Super Sport adorned in Dark Phantom blue with white stripes complimented by a black interior with bucket seats, and powered by a 396 cid V8 mated to a 4-speed transmission complete with Hurst shifter.

The Chevelle has been fully restored, the seller says

Listed on ClassicCars.com, the Chevelle is neither a numbers-matching car nor an SS clone, the seller says, “but everything about the car is correct for that year except the radio.” The Bradford, Pennsylvania, seller adds that the original AM radio will be included in the sale as well as other original parts that were replaced during the build process.

According to the seller, this vehicle is “as close to a ground up restoration as it gets,” noting that “only qualified mechanics” worked on the car and most of the replacement parts used in the build, supplied by Ground Up SS396 and Eckler, were new and not refurbished used pieces.

“If I had to do over again, I feel it is better to buy a car that is done and ready for the road instead of working on a car for over a year,” the seller said in the listing, “Just put the gas in and drive away. I have almost $60,000 invested in the car.”

The seller can no longer drive the car due to health reasons, according to the listing. As a result, just 125 miles were put on the garage-kept Chevelle during 2015.

“Do your homework on restoring a car and talk to the guys that have done it,” the seller says. “It is not a walk in the park. I found it was a lot of headaches and frustration.”

The car is listed with an asking price of $45,000.  Those interested would be buying the car “as is,” the listing says, adding that the Chevelle has some “minor road chips” and “a few small scratches” along with “a very small dent in the front hood.”

Despite the flaws, the owner says this Chevelle is “a real head turner, the car looks great and runs great.” And, it’s already done.