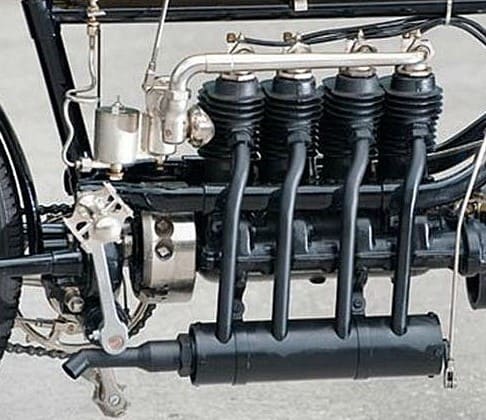 There are at least four reasons why classic motorcycles are on the rise among collectors: they are often purposefully beautiful, they are loads of fun, they take up less space in the garage than a car, and generally speaking, they are affordable to buy and own.

The Pick of the Day is a genuine antiquity, a rare 1905 FN four-cylinder motorcycle that was made by a Belgium firearms manufacturer, Fabrique Nationale d’Herstal, thus its simple brand name of FN. The rare bike definitely affirms the first three attributes, though not so much the fourth; this classic is priced at nearly $90,000.

In 1998, the Guggenheim Museum of New York City opened its groundbreaking Art of the Motorcycle exhibit, with more than 100 bikes covering a century of development displayed in the museum’s famous rotunda. That exhibit established the notion of classic motorcycles as viable artworks, and forever changed the way we look at two-wheeled transportation.

There was an FN in that exhibit, a 1908 four-cylinder bike that was essentially the same – with some technical improvements – as the 1905 model listed here for sale. FN built the first successful four-cylinder motorcycles in 1905, of which this is one of them, and reigned for some years as having the world’s fastest motorcycle.

Details are sparse from the Smithfield, Rhode Island, classic car dealer advertising the motorcycle on ClassicCars.com, other than to say it has been fully restored and was formerly part of the Otis Chandler Collection in Los Angeles, and was then owned by the late mega-collector John O’Quinn.

The 1905 FN is powered by a 362cc air-cooled engine with shaft drive to the rear wheel. These bikes were manufactured through 1923 with the engines getting larger, multi-speed transmissions added and foot pegs replacing the bicycle pedals.

The motorcycle is strikingly handsome with its brass fuel tank and nickel-plated features, such as a self-contained acetylene headlight and bulb horn. As well as being beautiful, it was powerful, reputedly capable of going 40 miles per hours.

Although looking at the tiny coaster brake on the rear wheel only, it would take some kind of courage and a clear road ahead to run it up to that speed.