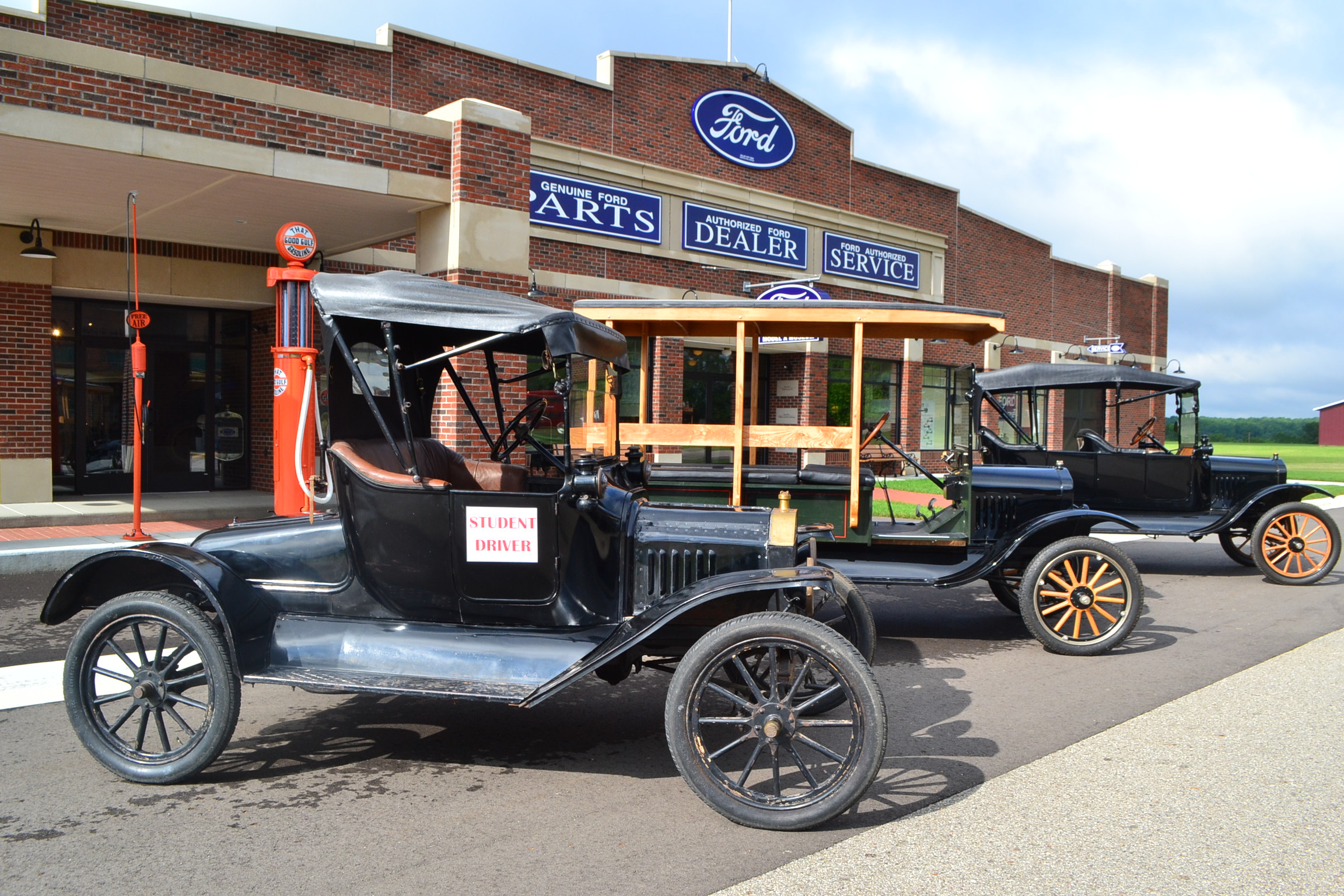 In celebration of the Gilmore Car Museum’s 50th anniversary, and with the support of AAA, which celebrates their centennial year in Michigan, the museum in Hickory Corners is offering the opportunity to get behind the wheel of an authentic Model T Ford from the museum collection and drive it around the museum grounds.

The museum news release notes that Henry Ford introduced the Model T as a sturdy, low-priced car for the “everyman” in 1908 and produced it with very few changes until 1927. Also known as the “Tin Lizzie,” more than 15 million were sold, making the Model T the longest production run of any single model automobile until the Volkswagen Beetle had its long run.

While the Model T may appear simple, it provides a challenge to drivers of modern cars as the Model T is controlled by three pedals on the floor, a handle beside the seat, and two levers on the steering wheel.

Any licensed driver, 16 or older, has the opportunity to participate in one of the 20 class dates and times. Each class is taught by long-time Model T owners and enthusiasts and each session includes practice drives in a Model T while museum historians provide history on Henry Ford, the early Ford Motor Company, and inspections of Model Ts.

“Think of it as going back to driver’s training — old school that is!” said museum spokesman Jay Follis.

The cost of the Model T driving experience is $105.00 per student or $95.00 for museum members. After successfully completing a road test in an authentic Ford Model T, student receive with a certificate of completion and souvenir booklet.

Class size is limited and they fill up quickly, so the museum suggests reserving a spot online or at the museum.

On the west coast, the California Automobile Museum in Sacramento offers guests the opportunity to learn to drive a Ford Model T on May 7, while Model T Drivers’ Ed registration is open at the LeMay Marymount in Tacoma, Washington. The next class will be May 14, followed by June 4, July 9, August 13 and September 10.

The California Automobile Museum hosts a Mother’s Day tea and talk  May 8 with fashion historian Bonnie Hansen sharing details about how the automobile contributed to Victorian era mothers and their free-thinking flapper daughters.

The next speaker-series discussion at the Blackhawk Museum, located in Danville, California, is May 7 with Allen Grant discussing the 1965 Shelby team.

The next Science Saturday at the National Automobile Museum in Reno, Nevada, focuses May 14 on “Exploring planet Earth,” followed by “Roving Mars” on June 11, “Journeying to the moon” on July 9, and “food in space” on August 13.

On May 14 the Simeone Museum in Philadealphia offers a demo day showing cars that were successful on the track but fell victim to changes in corporate philosophies, finances, and politics. Demonstrated will be a 1930 Bentley “Blower” 4.5 Liter Supercharged, 1956 Maserati 300S, and a 1963 Corvette Grand Sport Coupe.

The next class in a six-part series on the foundations of automotive photography at the museum is June 4, followed by July 30, September 17 and October 29.

The National Sprint Car Hall of Fame Museum’s series of monthly “Sprint Car 101 forums” will be held at the museum in Knoxville, Iowa, on May 21, June 11 and July 16.

The Auburn Cord Duesenberg Automobile Museum in Auburn, Indiana, hosts a number of Children’s Activity Days in June and July. The museums “camp” runs from 10:00 a.m. to 3:00 p.m. and immerses campers, ages 10-12, in hands on activities, presentations, and interaction with the museums exhibits. The dates are Tuesdays June 7, June 14, and June 21 and Wednesdays July 13, July 20, and July 27.  The price is $50 per student per day.  This not only includes lunch but also includes something each day that campers will take home to share with family and friends.

Registration is open for the LeMay: America’s Car Museum summer camp in Tacoma, Washington.  Children will be able to use the racing simulators and slot car track in the ACM Speed Zone in preparation for a team race on the final day of camp while learning what makes race cars fast, safe, and fuel-efficient through daily challenges. Local race car drivers will also be on hand to showcase their vehicles and equipment used to give tips and advice. The first session is for ages 12-15 and duns July 25-29 from 9:00 a.m. to 4:00 p.m. The second session is for ages 8-11 and runs August 8-12 from 9:00 a.m. to 4:00 p.m.

The LeMay, America’s Car Museum opens a new exhibit May 7, “BMW: Propelling a Century of Innovation,” to highlight some of the brand’s vehicles that have amassed a strong sub-culture, such as the 1973 BMW 3.0 CSL, 1988 BMW E30 M3 and the forward-looking 2016 BMW i8, which are all in the display.

The World of Speed Museum in Wilsonville, Oregon, celebrates the 100th running of the Indianapolis 500 with its first major exhibit, which opens June 10 showcasing 33 Indy racing cars, including Mario Andretti’s 1981 STP car, Al Unser Sr.’s 1967 car and Al Unser Jr.’s 1984 car. The exhibit will include memorabilia from some of the Pacific Northwest’s greatest drivers and car engineers, including Art Pollard, Len Sutton, Rolla Volstedt and Parker Johnstone. Suits, helmets, shoes, gloves, models and photos will be featured, along with World of Speed’s complete collection of Indianapolis 500 race programs.

This weekend, May 7, the Blackhawk Museum in Danville, California, holds its third annual Carroll Shelby Memorial Car Show. On June 4, the museum plans its “Day at the Races,” which provides registered museum participants with parking next to the paddock at Sonoma Raceway during the Sonoma Historic Motorsports Festival. Other features include use of the Simeraceway hospitality pavilion complex, and the opportunity to do laps in participants own classic or collector vehicle during the SVRA’s lunch session, and a tour of the Simeraceway driving center.

The National Corvette Museum in Bowling Green, Kentucky, plans its annual C4 Gathering, May 12-14. The gathering features seminars, tours, and other actives that will be specific and appeal to models produced between 1984 and 1996. Online registration is available through the museums website.

The Gilmore Car Museum celebrates its 50th anniversary with a car show May 21 to honor its founder. The show, “the Donald Gilmore Classic,” showcases cars from 1896-1942 and includes a driving tour May 20 and a swap meet May 21.

The museum plays host to the 30th anniversary of The Classic Experience, with includes a driving tour, a Grand Classic Concours d’Elegance, and “The Experience” car show, all presented June 3-5 by the Classic Car Club of America Museum. The show features automobiles from 1915-1948.

History comes alive June 4-5 at the Owls Head Transportation Museum in Owls Head, Maine, as the museum kicks off its 2016 car show season. Alongside the car show, open to vehicles pre-1996, the museum aims to demonstrated as many vehicles as possible from their ground vehicle collection, and beat last years record of 75 demonstrated during the event.

The museum holds its 9th “Classic and Vintage Commercial Show” on June 11-12, featuring over 400 classic vehicles built before 1997.

LeMay-America’s Car Museum has announced its 2016 cruise-in dates. The cruise-ins are free and feature a DJ, food and the option to enter to win prizes and the people’s choice award. The dates are May 12, June 9, July 14, August 11, September 8 and October 13.

“Museum in Motion” tours by the National Corvette Museum have begun. The next tours include the Marble and Glass tour through New England from May 19-22.  The museum holds its seventh annual “One lap of Kentucky” fund-raising event in October over the course of three weeks: October 11-15, 18-22 and 25-29. The event previously has been a one-day Corvette excursion led by the state troopers, but the event this year is open to enthusiasts of all different years, makes and models, and it is a multi-day drive visiting Kentucky’s significant landmarks.