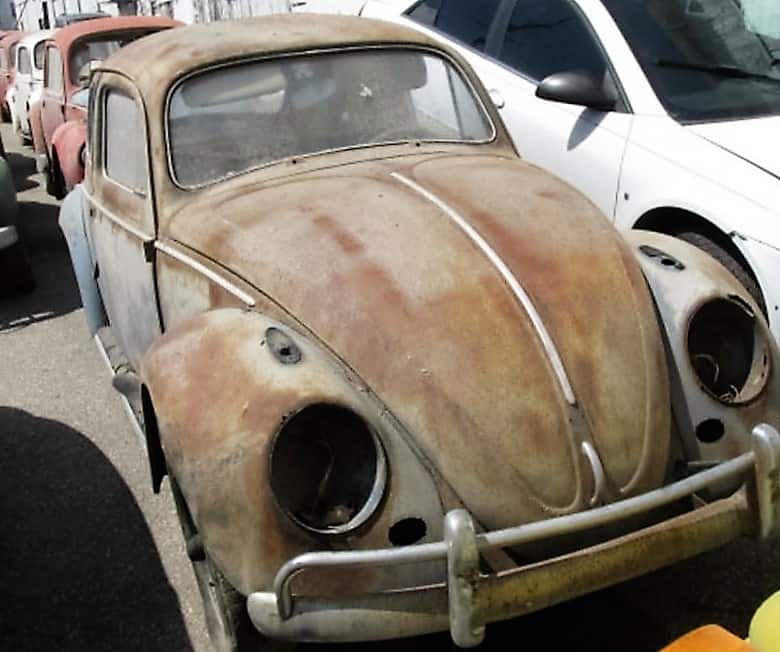 One man’s junk is another man’s treasure, or so we’ve been told. For certain Volkswagen fanatics, the recently uncovered cache of 25 forlorn VW carcasses and several tons of musty parts in Iowa might seem like a trove of possibilities.

Some of the cars could be salvageable and provide a way to get into a VW restoration project on the cheap. Or the multitude of parts could include some necessary fodder for that VW project already started, or even for supplying a VW restoration business.

Crusty VW beetles after being removed from the building | Hoge

The mishmash of VW cars and parts, oddly found packed together on the second floor of a lumberyard building in Cedar Rapids, Iowa, will be auctioned June 10 and 11 by Hoge Auctioneering, a business that specializes in farm and estate sales.

The lumberyard apparently was once the site of a Volkswagen dealership, and the collection remained stored in the rafters of the barnlike building for decades after the business moved out. Extraction of the cars and parts by Hoge required a forklift and removal of part of the building walls.

Some of the cars could be restoration candidates, according to the auction house,  while others would be good for parts only. They include a variety of beetles including convertibles, a few Karmann-Ghia coupes and convertibles, a Type 3 “squareback” wagon, a single-cab pickup, a VW sand rail and a homemade dune buggy.

The June 10 evening auction will include only the parts, which the auction house is still cataloging, and the all-day July 11 sale will include cars as well, Hoge says on its website.

The cars appear to be air-cooled models mainly from the ‘60s into the ’70s, with a couple from the late 1950s, and do not include any of the desirable early oval-rear-window beetles or first-generation buses. The pickup is of the later “bay window” variety of Type 2 microbus, less valuable than its predecessors. So while the sheer scale of the find might be impressive, the actual vehicles appear to be fairly garden-variety VWs.

But some of what’s been dragged out of the barn still could fire up VW enthusiasts as crosses the auction block.