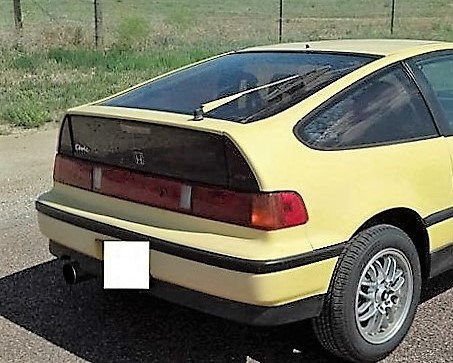 There is a lot of discussion in the hobby about future classic cars. Will there be any? What are they? Who will the collectors be, and when will we see their influence?

If you look at today’s collector car market, it is already happening. And a lot of the cars rising in collectability are from Japan, models such as the Nissan GTR and the Acura NSX. These cars are already changing hands in excess of $50,000. But there are Japanese collector cars that can be had for a lot less.

The Pick of the Day, a 1989 Honda CRX for sale in Phoenix, Arizona, can be had for about a tenth that. These sporty little hatchbacks were extremely popular in their day among young drivers, who are older now and perhaps looking to relive the experience. Today’s younger drivers also find a lot to like about the CRX.

Being located in Phoenix also alleviates one of the major concerns when buying a CRX, and that’s rust. Dry Arizona cars simply do not rust, although the Arizona desert sun can be hard on interiors.

This car’s  interior looks to be in nice shape, however, judging from how it appears in the photos, with cloth seats in good shape and an uncracked dash.

The Honda in Barbados Yellow has had some beneficial period modifications, including an AEM cold-air intake, aftermarket wheels and a Neuspeed strut brace, according to the listing on ClassicCars.com. Now all it needs are some Mugen wheels to complete the vintage 1980s look.

According to the seller, this CRX has 98,000 miles, which is reasonably low. It has a moon roof and new drive axles, tires and suspension bushings.

The CRX is a fun car, and examples this clean seem to have all but evaporated from the market. Period road tests of the CRX ranked it as one of the best handling cars on the road, and most journalists spoke of what a hoot they are to drive. If you combine that with the reliability of Honda cars from this era, you end up with a future classic car that is hard to beat.

The seller advises to hurry and buy it “before someone scoops up this gem.”

This CRX is priced at only $5,200 or best offer, which looks to be a good deal, and as the seller says, it should be scooped up pretty quickly.