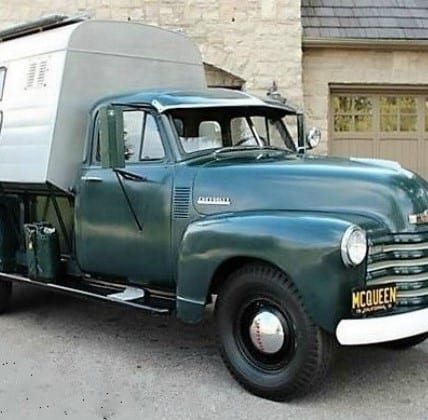 Still aching for a drivable piece of Steve McQueen magic, but those million-dollar Porsches are a bit out of reach? Then take note: The vintage Chevrolet camper truck once owned and driven by the late film icon, and apparently the last vehicle he ever drove before his untimely death, is up for sale again.

The Pick of the Day is the 1952 Chevrolet 3800 pickup with a hand-built camper shell that McQueen used regularly, which has been verified by a Certificate of Authenticity signed by McQueen family members as well as the California vehicle registration with McQueen’s signature.

Although the Ontario, Canada, classic car dealer provides scant information in the ClassicCars.com ad about the historic pickup, prospective buyers can view the listing on the dealer website for a complete rundown.

The truck was featured before by Classic Car News when it went to auction at Mecum’s Anaheim, California, sale in December 2015. The sale price then was just $37,500, plus auction fee, which seemed like a steal for a genuine piece of McQueen lore.

The truck sold again in January at Barrett-Jackson’s Scottsdale auction, where it reached $60,500, including auction fee. That was still a bargain considering that any item ever used by McQueen usually gets bid into the stratosphere at auction.

The long-bed pickup is in excellent original condition with fewer than 40,000 miles on the odometer, according to the website description. The truck is powered by a six-cylinder engine, which reportedly is of 1954 vintage, and a three-speed manual shifter on the column.

McQueen, who died of cancer in 1980, reputedly took his last drive in the pickup with evangelist Rev. Billy Graham to Ventura Airport in California. From there, the actor flew to El Paso, Texas, on his way to Juarez, Mexico, for the final surgery before he died.

The Canadian dealer provides no asking price for the pickup, but according to its past performance at auction, the truck is most likely the least expensive way to buy into the McQueen saga.

After all, during Mecum’s Monterey auction in August 2015, a 1976 Porsche 930 Turbo Carrera that was special ordered and driven by McQueen sold for a stunning $1.95 million. So yes, the camper could be quite affordable.