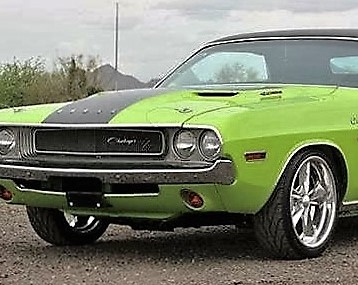 Ordinarily, I might pass up this cool-looking Hemi Challenger because it’s not a true factory R/T muscle car but a re-creation. This one, though, has great celebrity provenance as the personal car of shock rock’s greatest anti-hero, Alice Cooper.

Suitably painted Sublime Green, the Pick of the Day has been restored as a 1970 Dodge Challenger 426 Hemi R/T S/E coupe, powered by what the Scottsdale, Arizona, dealer describes as a “real date-coded, vintage, dual-quad street 426 Hemi.”

Alice Cooper, a resident of nearby Paradise Valley, is known as a fan of vintage muscle cars, and he has been seen haunting Scottsdale’s Barrett-Jackson collector car auctions in the past.

This Challenger, as well as being transformed into a desirable performance machine, has been signed in several places by the rock star. It “also features custom No More Mr. Nice Guy body tags,” the dealer says in the listing on ClassicCars.com.

“There isn’t a place you’ll take this car that it won’t bring comments and a crowd,” the seller says.

For the uninitiated, Alice Cooper (aka Vincent Furnier) and his band burst onto the rock scene in the early 1970s with a bizarre stage show that featured the ghoulish “Alice” along with such horror-movie props as electric chairs and guillotines spattered in fake blood. The band’s breakout hit was the 1971 teen anthem “I’m Eighteen” followed a year later by the now-classic “School’s Out.”

In Arizona, Alice Cooper’s life is hardly the stuff of nightmares. He now is known as a celebrity golfer, restaurant owner, TV pitchman and popular all-around personality, frequently making appearances for charitable causes. He lives in a palatial home with his wife, and the couple has three grown offspring.

“This car was done right and runs amazing,” the dealer says.

The Challenger looks sharp in the many photos included with the listing, and it would be hard to tell apart from the genuine item without checking the VIN codes. But the big difference is the price.

One of the rare real factory Challenger 426 Hemi R/T coupes, of which there were just over 300 produced, would cost you nearly $250,000 in excellent condition, according to the Hagerty price guide. This re-creation, even with the Alice Cooper ownership, is priced at a more-affordable $64,990. Because like Alice, it’s all just make believe.