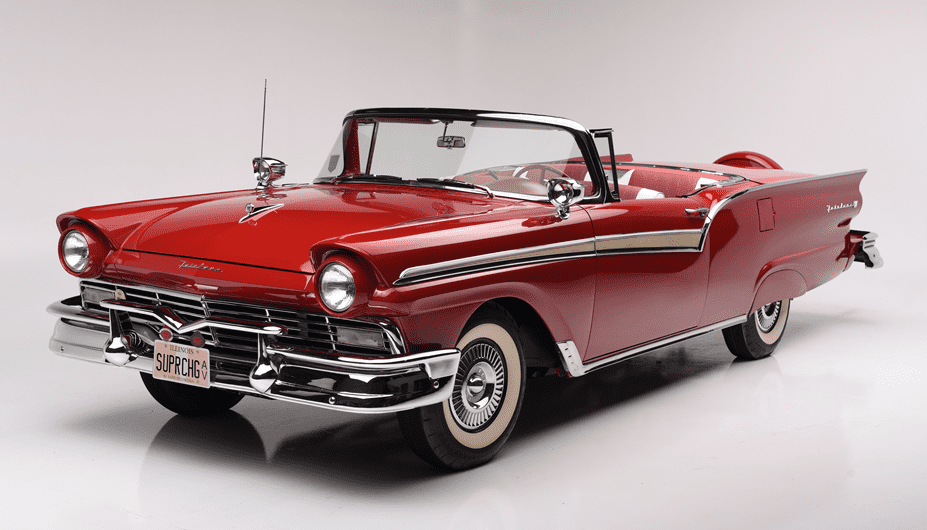 Editor’s note: This is the third in a 10-day series featuring cars to be sold April 8-10 at Barrett-Jackson’s 2016 Palm Beach Auction.

In 1957 Ford’s chief of styling George W. Walker successfully challenged the norm with the company’s “equaflair” design expressed in the Fairlane series. All of the refinements set forth in the new Fairlane helped to reassure buyers that they needn’t look elsewhere to meet their wants or needs.

The Dearborn assembly plant made a limited number of F-code Fairlanes equipped with 312-cid Thunderbird V8 engines that were fitted with a 4-barrel carburetor and a McCulloch/Paxton centrifugal supercharger. A special cylinder head was fitted to these engines to keep the compression ratio 8:5:1 so they could drive on regular pump gas.

The F-code engine was available on the Skyliner as a factory option with either a manual or automatic transmission, however, only seven Fairlane 500s were fitted with both F-code engine and retractable hardtop, making this example, offered at Barrett-Jacksons Palm Beach auction, exceptionally rare.

The original owner used this Skyliner at top-level drag races winning the National Championship for his class in 1957 and 1958. Since then, it has been treated to a full concours-quality restoration and shortly after began competing at International Ford Retractable Club and AACA National events, where it developed an impressive show career with only first place wins.