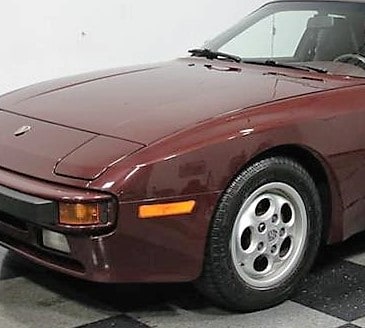 While browsing the many cars for sale on ClassicCars.com, I decided the Pick of the Day should be a Porsche. But when I ran a search on Porsche, I was amazed at how expensive even the most pedestrian 356 or 911 driver-level cars had become. This market has continued to take off, with even the 914, a car essentially unloved by the Porsche faithful, somehow now selling in the high teens to as much as $40,000.

The Pick of the Day is this stunning and very original 1987 Porsche 944 advertised by a dealer in Lithia Springs, Georgia, with an asking price of just $15,995.

When introduced as a 1982 model, the 944 was Porsche’s new entry-level sports car. Having learned the hard lessons of using another company’s engine in the 924, Porsche took all that was good about the 924 – the terrific chassis and overall design – and created a new Porsche with its own front-mounted, liquid-cooled engine that was basically one-half of the aluminum V8 used in the Porsche 928.

The 2.5-liter four-cylinder is a great engine in its own right, and when presented in a sports coupe with aggressive fender flairs, spoilers and a powerful stance, the car became an instant hit. The car also offered ease of use never before seen in the cars from Stuttgart, designed to fit just about anyone and, for probably the first time in Porsche history, a decent air-conditioning unit.

To drive a 944 is to love it, as they are one of the most-satisfying cars to drive at the limit, having a perfect 50/50 weight balance, rack-and-pinion steering, wider tires than the old 924 and more-than-adequate horsepower. Add to that fuel economy in the high 20s and service costs that are relatively easy to deal with, and you have a great sports car to own and enjoy with limited stress.

One exception to the reasonable service costs is clutch replacement. Replacing the clutch on the 944 is an expensive job, on the order of $1,500 to $2,500. These cars were delivered new with a rubber-center clutch that wears out and fails prematurely. If you are considering a 944, be sure to inquire as to whether the troublesome clutch had been replaced with the later design clutch without that rubber center. I would want to see receipts proving that this job had been done.

There’s no mention in the ad for this car whether the clutch has been replaced, so any perspective buyer would be wise to ask about it. The dealer does say that the engine timing belts have been replaced, which is also an important service.

According to the seller, the car has been repainted in the proper burgundy color but is otherwise all original with under 70,000 original miles. As a 1987 model, it has the desirable later dashboard introduced in the second half of 1985 that is more modern and preferred by many.

The ad also states that this 944 includes extensive service history and books, plus its original tool kit, jack and air compressor.

It is getting harder and harder to find 944s in such nice condition, and this one could make for a good first Porsche and an easy-to-live-with first classic car.