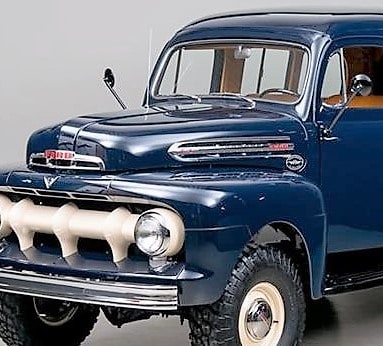 The first Ford truck to wear the Ranger badge was not a pickup but what was then known as a carry-all vehicle, and now called an SUV. And it wasn’t even a pure Ford but a panel truck converted by two outside vendors into a passenger wagon with four-wheel drive.

The Pick of the Day is a rarely seen 1951 Ford F1 Ranger Marmon Harrington that is described as having been extensively restored to immaculate original condition.

The adventure truck does look like a beauty in the extensive photo gallery included with the listing on ClassicCars.com, posted by a classic car dealer and restorer in Scotts Valley, California.

The story of how this unusual truck came to be is told by the dealer in the ad:

“In 1951, Ford did not produce a carry-all type vehicle or four-wheel drive,” the seller wrote. “They looked to specialty maker Marmon Harrington for assistance in creating these rare vehicles

“A truck such as this would have started life as a Ford panel delivery truck sent directly from the factory to Marmon Harrington. The body was then modified by a company called Seibert and the drivetrain converted to 4X4 by Marmon Harrington.

“It is believed that only 54 of these vehicles were built between 1949 and 1952, with only 11 known to exist and only 2 restored. These would the first vehicles ever to receive the Ranger designation from Ford.”

This F1 Ranger was professionally restored under the guidance of its last owner, according to the seller, who spared no expense in turning the Ford into a showpiece of originality. The Ford retains its original 85-horsepower flathead V8 and all of its factory and conversion features.

“Every detail is exact down to Ford embossed glass,” the dealer wrote. “Its exceptional restoration and incredible rarity garnered the truck a spot in special Ford F1 display at America’s Car Museum for 2015, and it would go on to take the second place trophy in the Working Guys category of the Pacific Northwest Concours d’Elegance of that year.”

There’s no asking price listed for the truck, with the dealer asking to be contacted for the information. The value of such a rare piece of U.S. auto history in apparently superb condition should be pretty strong.