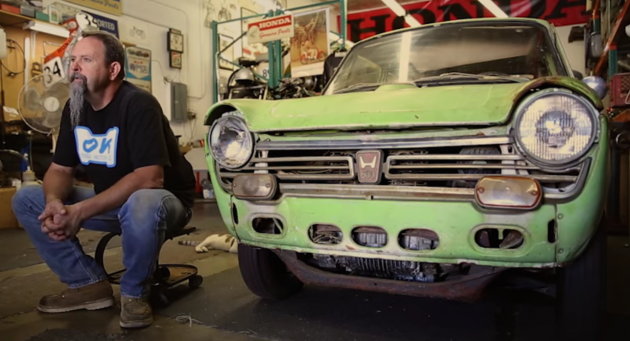 After a decade of growth that made Honda the top-selling motorcycle manufacturer in the world, Honda set out to sell cars in the United States, entering the market in 1969 with the N600. The N600 was the first “mass market” car sold by Honda with production for the United States at approximately 35,000 by 1972.

Known for being nimble and fuel-efficient, the Honda N600 was 122 inches long, weighed nearly twice as much as the company’s future supercar, the NSX, and featured an all-alloy engine capable of 9,000 rpm and 81 miles per hour.

The first Honda N600 imported to the United States had collected dust for many decades before it made its way into the hands of Los Angeles-based mechanic Tim Mings. Having worked exclusively on the Honda N600 for over 20 years, Mings had become known as the only full-time N600 mechanic in the world, restoring over a thousand of them during his career.

“Documenting the meticulous process of bringing it back to life really embodies the Honda spirit” said Alicia Jones, Honda’s social media manager in the United States. “We can’t wait for viewers to come along with us on this journey.”

Debuting March 16, episode one of the series gives viewers a look at the unrestored vehicle and introduces Mings, who comments that of the first 50 N600s produced for the United States, only three are known to exist. He tells viewers how the serial one N600 came into his possession and his goals for the build.

The series will share Mings’ progress each week and the surprises he encounters as he brings a part of Honda’s history back to life.