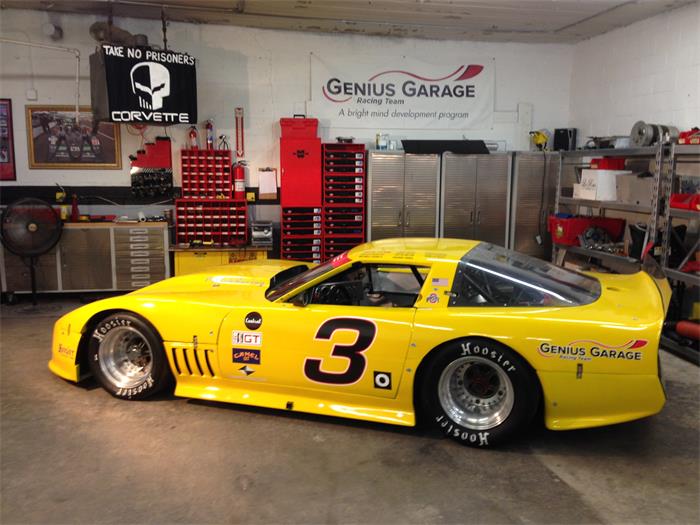 The Genius Garage, a non-profit organization, was developed to give the best and brightest students the opportunity to show potential employers and partners what they are capable of doing while giving them the best transition from the academic world to their professional careers via building and racing cars.

The sale of our Pick of the Day, a 1988 Chevrolet Corvette used in 2015 for the Genius Garage Student Racing Team and Mentorship Program, will help support the program and its development.

The car was originally run by Karl Keck starting in 1988 and is a Riggins chassis in addition to being one of the few originally Corvette bodied IMSA GTO cars.

According to the listing on ClassicCars.com, this racecar produces 700 horsepower out of a 358 cid iron block and aluminum headed dry-sump Chevy V8 mated to a 4-speed Jerico transmission. The listing states the rear suspension of the Corvette is a three-link setup with Watts linkage and quick-change rear end.

The car is “loaded with high-quality parts, tough as nails, built smartly,” the listing says, adding that it is without any bad tendencies and is a pleasure to drive fast.

In addition to continuing the Genius Garage program, the car is tax-deducible and comes with two extra sets of wheels with one set mounted with racing tires, a spare nose and support, many quick-change gears, a full set of new brake pads and rotors, and log books.

Since the restoration of this vehicle, the listing states that the car has had three vintage race weekends and one test session at the Corvette Motorsports Park. In the Corvette’s first race, it finished fourth overall and second in class at SVRA Indy. The car then returned to Ohio and scored two first place finishes from the pole, beating the previous race’s Indy winner.

“The last race had us on pole and clearly the fastest,” says the listing. “A crazy sanctioning body debacle and political move by a car club unfairly restructured the race with no warning for non-car club entries, which led us to not running the car in the last event.”

The listing notes that the IMSA GTO Corvette is a turn-key entry to the Monterey Historics and eligible to race in most every vintage event.  It’s very fast and easy to maintain, the listing adds. The car is being offered by a dealer in Sylvania, Ohio, for $68,000.

To view the vehicle listing on ClassicCars.com, see Pick of the Day