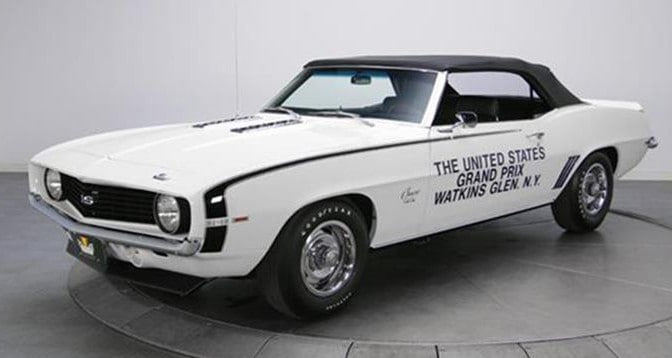 Eighteen Formula 1 drivers set out October 5, 1969, to do 108 laps around the 2.3-mile Watkins Glen road course in upstate New York. The driver to complete all 248.4 miles in the shortest time would win a $206,000 purse, a record-setting payout at the time, as well as the only North American Grand Prix contest at that time.

Accidents took several drivers out of the race while mechanical issues plagued many of the remaining racers, including American drivers, Mario Andretti and Pete Lovely.

History was made that day as only two competitors managed to complete all 108 laps. With a time of 1 hour 57 minutes and 56.84 seconds, Jochen Rindt became the first Austrian driver to win the race.

Side profile of the Camaro used in the U.S. Grand Prix

Forty-seven years later, the original 1969 Camaro pace car from that race is being offered at Vicari Auctions’ first Tampa sale of the year, April 1-2, in the Expo Hall of the Florida State Fairgrounds in conjunction with the Festivals of Speed & NSRA Southeast Street Rod Nationals.

According to the Vicari listing on ClassicCars.com, the Camaro was built by Chevrolet specifically to pace the 1969 U.S. Grand Prix and was equipped with an L78 396 cubic inch big-block engine featuring a solid-lifter camshaft, 11:1 compression, forged rotating assembly and rectangular port heads.

The engine has been rebuilt, but it is the original numbers-matching block. The car does currently use a Holley carburetor, but the original carburetor is included in the sale.

In addition to the original engine, this 1969 Camaro retains its original TH400 automatic transmission, 12-bolt rear end, and its original gauges and custom rosewood steering wheel.

The pace car has been refinished in its original Dover White paint complete with black SS stripes and has been restored to its 1969 pace car specifications, which include its Formula 1 pace car decals.