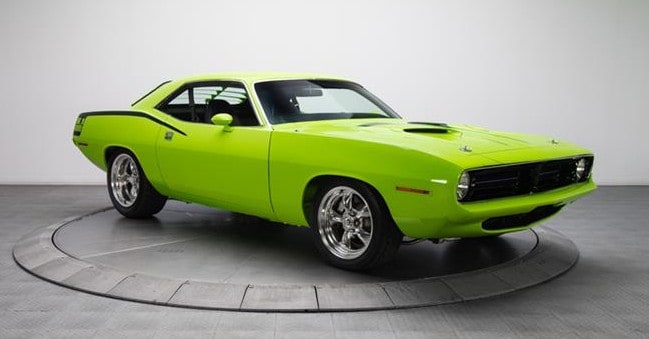 Whenever Chrysler decides to assemble a purpose-built performer whose main mission is to kick asphalt and take names, the results are usually spectacular. An excellent combination of power and handling makes this 1970 Plymouth Barracuda the Pick of the Day.

Listed on ClassicCars.com, this Cuda has been through a thorough restoration that began with body work and has been painted Limelight 2-stage, the seller says. Other details were added such as subtle green ghost flames and the Cuda decals.

The attention to detail all adds up to one super slick, all-American muscle car that benefits from what its restorer calls “reversible rectification,” according to the listing, which adds that means “anything changed could be taken back to stock if a future owner decides he wants to trade his one-of-a-kind show-stopper for a ‘Cuda that looks like everyone else’s.”

Under the hood sits a 6.1-liter engine with a forged crank, lighter pistons, strengthened rods, new oil jets, variable cam timing and increased flow heads to turn 10.3 to 1 compression into 425 horsepower. According to the listing, the pros at Indy Cylinder Head decided to make the engine their own by boring and stroking the block, installing CNC-ported and polished heads and bathing everything in a familiar coat of Hemi Orange. Other highlights include modern fuel injection, TTI headers, and modern air conditioning.

The engine is hooked to a Keisler-supplied Tremec TKO600 5-speed. The listing also stated that the car’s old-school torsion bars have been replaced by a polished AlterKtion front-half, which includes tubular controls arms, modern coil-over shocks and power rack-and-pinion steering.

When it comes to the Plymouth’s cockpit, this car takes everything great about the original Chrysler design and builds on it. Inside, original seats are accompanied by modern seat belts and clean ostrich inserts. The car’s simple door panels, which include factory power windows, are wrapped in tight leather. At the front of those panels, a padded dash anchors green-lit Auto Meter Pro-Comp Ultra-Lite gauges above crisp Pioneer audio and controls for Classic Auto Air conditioning.

The Cuda is being offered by a dealership in Charlotte, North Carolina for $129,900.