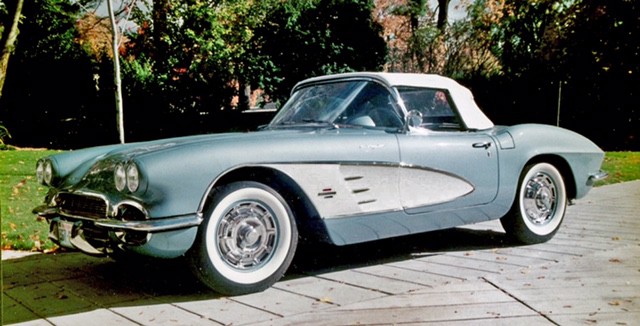 The Corvette has undergone a mechanical freshening with the original numbers matching engine completely rebuilt to original specifications except for a 30/1000 bore due to wear. The engine features fuel injection, the correct bell housing, its generator and starter have been rebuilt and it is mated to a T-10 transmission. Other components have been looked at and replaced such as the rear-wheel bearings, shocks, brake shoes and resurfaced drums.

In addition to the Vince Neil Corvette, McCormick Auctions’ 60th event has some other significant vehicles set to cross the block, including a 1962 Porsche 356 S90, a 1963 Mercedes-Benz 190 SL roadster, and a 1959 Cadillac Coupe De Ville.

Set as the first vehicle to cross the block is a 1967 Volkswagen Beetle. The car was donated by McCormick Auctions and will be auctioned off by the Palm Springs mayor with city council members acting as “ring men.” All the proceeds from the sale of the VW benefit Angle View, a non-profit organization dedicated to helping children and adults with disabilities reach their maximum potential.

For the past 15 years, McCormick has held its sales at the Spa Resort Casino, but due to remodeling there, the auction has been moved to the Palm Springs convention center, which is just a quarter mile from the McCormick showroom offices.