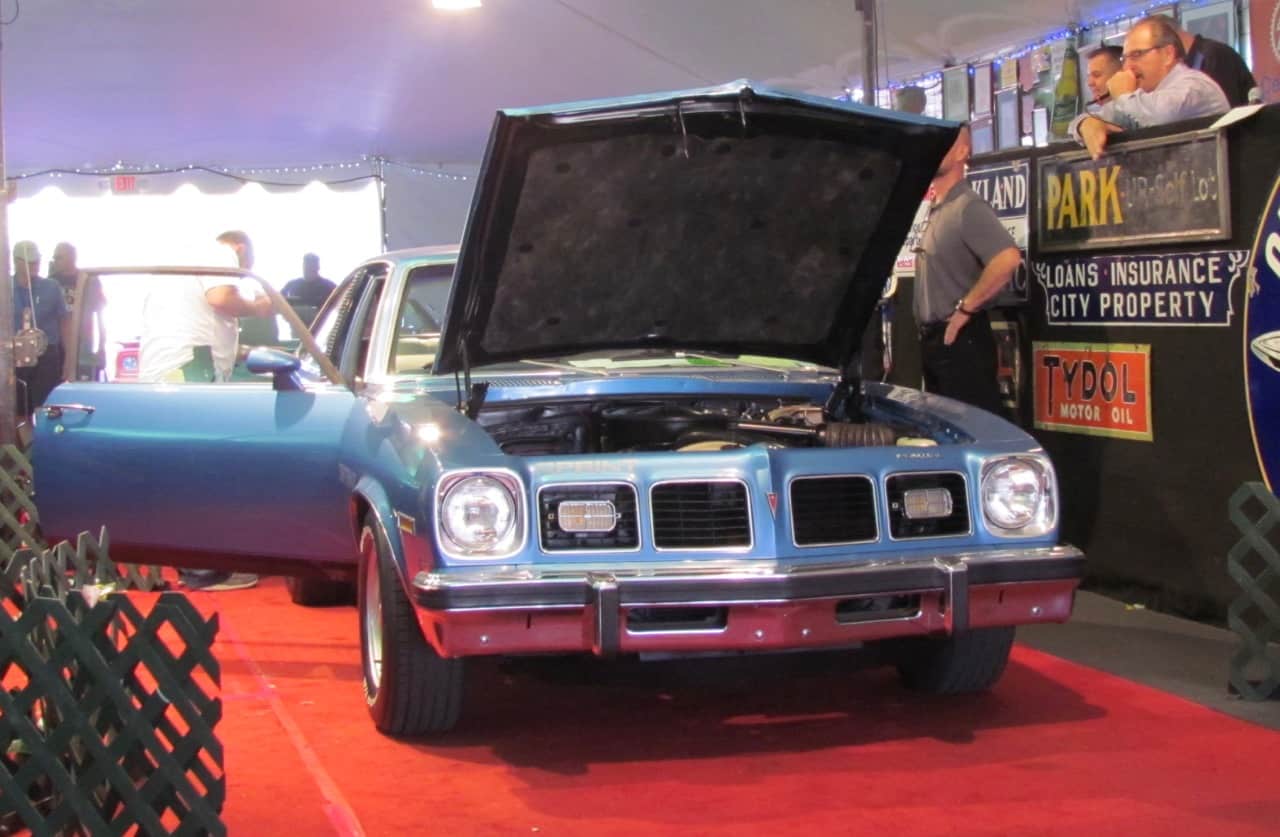 Cars on the block at Barrett-Jackson | Larry Edsall photos

Now that they’ve had time to check their figures and to add in post-block sales, the six collector car auction houses doing business last month in Arizona report total combined sales of more than $256 million.

While that figure is less than the nearly $293 million in sales last year, a number that was boosted by the sale at Barrett-Jackson of the huge Ron Pratte Collection, the $256 million total exceeds the strong 2014 auction sales results of more than $248 million.

Add in the more than $100 million in sales that Mecum Auctions did in January in Kissimmee, Florida, and it would seem the classic car marketplace in North America is off to a strong start for 2016.

As usual, Barrett-Jackson topped the total sales list in Arizona, posting $102 million in vehicles and another $3 million in automobilia. Of that $102 million, and with the likes of the Zac Brown Band, Jay Leno, racing drivers including Brad Keselowski and Ken Block, and various auto company executives on the block, more than $3.4 million was raised for charities through the sale of several special vehicles, led by the VIN 001 Acura NSX that generated $1.2 million for the Pediatric Brain Tumor Foundation and Camp Southern Ground.

“More than 45 years ago, the first Barrett-Jackson event was held to raise money for the Scottsdale library,”Craig Jackson, chairman and chief executive of Barrett-Jackson, said in a news release. “I’m proud that spirit of charity continues to be such a strong part of our auctions today. Every year, the generosity of our consignors, sponsors, celebrities and bidders grows stronger.”

Barrett-Jackson, which has exceeded $100 million in sales in Arizona for the past four years, reported 2016 attendance of some 350,000 people during the nine-day event.

RM Sotheby’s reported overall sales of $62.8 million, topping $60 million in Arizona for the second year in a row. The $9.9 million paid for a 1937 Mercedes-Benz 540 K Special Roadster was the most ever paid for a vehicle at any Arizona classic car auction. Seventeen cars sold for $1 million or more during RM Sotheby’s two-day sale, which drew bidders from 20 countries.

“Though we did not witness significant price increases, we were very encouraged to see the strong sell-through rate (85 percent), which indicates continued interest in the hobby,” Ian Kelleher, managing director of RM Sotheby’s West Coast Division, said in a news release. “The auction was anchored by several notable world records, with numerous lots attracting highly competitive bidding from an enthused audience.

“There remains a healthy appetite for high-quality, fresh-to-market consignments, and with this week’s results on par with the strong success of last year’s Arizona sale, we expect continued interest, attendance and participation at our upcoming events.”

Gooding & Company posted overall sales of more than $43 million, a figure it has reached or exceeded in each of its past four Arizona auctions. The company had an 86 percent sell-through rate with nine vehicles selling for $1 million or more, led by a 1950 Ferrari 166 MM/195 S Berlinetta Le Mans that sold for $6.49 million.

“We were thrilled to set some new world records for exceptional cars at this weekend’s auctions,” David Gooding, founder and president of Gooding & Company, said in a news release. “The demand in the market is definitely high for cars that are the best of their category and never before offered.

“We are seeing collectors pay a premium for cars that are unique because of history, condition and provenance,” he added.

Russo and Steele enjoyed the largest percentage increase in sales compared with 2015. It had $20.7 million in transactions this year compared with $17.2 million the previous year. The auction sold 520 vehicles and had a 72 percent sell-through rate.

“It is very clear that the impressive increases we demonstrated in Scottsdale this year show the vigor and vitality of our segment within the current collector car marketplace,” Drew Alcazar, co-founder and chief executive of Russo and Steele said in a news release.

“This year, we didn’t rely on a multitude of multi-million dollar and/or high-profile celebrity-type cars with stories attached, yet we still produced positive numbers universally across the board, which is something only Russo and Steele achieved during this year’s events. It demonstrates that our clients greatly appreciate the customer service-focused philosophy of cars and camaraderie.”

“What we saw this year in Scottsdale was that the ‘best-in-class’ cars are attracting strong interest,” Jakob Greisen, head of Bonhams Motoring department, said in a news release. “We sold a lot of very good cars across a broad spectrum and collectors are responding to prime examples that are sensitively priced.”

“The collector car market is robust and collectors are willing to pay prime levels – indeed records – for the best examples,” added James Knight, global head of Motoring at Bonhams.

The sixth company staging an auction in Arizona was Silver Auctions, which did a reported $3.8 million in January, up from $3.1 million in 2014 and $3.5 a year ago.