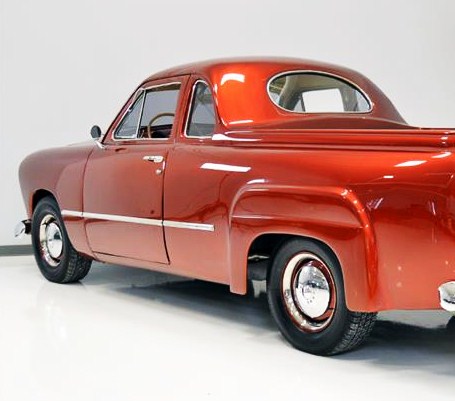 Now for something completely different.  Long before there was a Ford Ranchero or Chevrolet El Camino, the wily Australians invented what they called the “ute,” short for utility coupe, that combined the style and comfort of a passenger car with the utility of a pickup truck.

The Pick of the Day, a 1949 Ford Utility Coupe, might look like an imaginative custom build, but it is actually a factory product from the Australian branch of Ford designed so that country folk could have “a vehicle to go to church on Sunday and carry pigs to market on Monday.”  Never imported to the U.S., the utility coupes were unique to Australia until the advent of the Ranchero and El Camino.

The ute, listed on ClassicCars.com by a dealer in Cleveland, has been transformed into a nicely done resto rod, and converted from right- to left-hand drive for American roads. Part of the rod’s creation was to replace the stock front end with a General Motors subframe and power steering, so the steering changeover was a natural.

The dealer touts the exceptional build of the ute, including the finely finished paint and bodywork.

“After everyone gets past the unusual bodywork, the thing that they notice is the paint, which is a spectacular hue called Candy Cinnamon Pearl from PPG,” the seller says in the ad. “It’s gorgeous in person and outside in the sunlight, it’s downright amazing.

“The doors open and close with precision, the hood (which is on pneumatic struts, not springs) snaps closed easily, and there’s not a wave or a ripple anywhere on those long quarter panels. The bed is beautifully finished, with oak slats, polished skid rails, a spare tire mount, and interior panels that are finished to the same high standards as the rest of the bodywork.”

All the chrome has been restored, the dealer says, including the dealer-installed driving light in the center of the grille’s “bullet” design.  The bulb remains in the original six-volt configuration so it’s not hooked up, but it certainly looks cool.

The seller goes on about the custom features: “The hood ornament has a Plexiglas crown, all the stainless was polished and reinstalled, and 1949 Lincoln taillights were used out back because the Ute only used a single taillight on the right. A custom bumper was fabricated using two 1950 Ford sedan bumpers that were seamlessly stitched together and chromed to look completely OEM.

“The interior was given a complete makeover as well, but the essence of the original design survived 100% intact. Most notably is the switch from right-hand to left-hand drive, which was accomplished by simply transplanting a domestic 1949 Ford instrument panel.”

To retain the vintage feel, the original Ford gauges were rebuilt and retained, and they work properly, the dealer says, and the original bench seat and door panels were reupholstered in period style. A custom panel was designed to hold the Vintage Air system with the vents hidden beneath the dash.

Under the hood is a Chevy 350 V8 with an Edelbrock carburetor and Flowmaster exhaust, hooked up to an automatic transmission and GM 10-bolt rear.  The car runs and drives beautifully, the seller says. The engine is custom trimmed and includes Cadillac valve covers and air cleaner, for whatever reason.

Sounds nice, and you’d never have to worry about running into another one on the street or at the car show.  And the price is right, at $49,900, for what is apparently a terrific and highly unusual street rod.

“We’re extremely impressed by this Utility Coupe,” the dealer adds. “It’s the coolest thing you’ve never seen before, but you’ll be even more pleased by the quality that went into the build.”