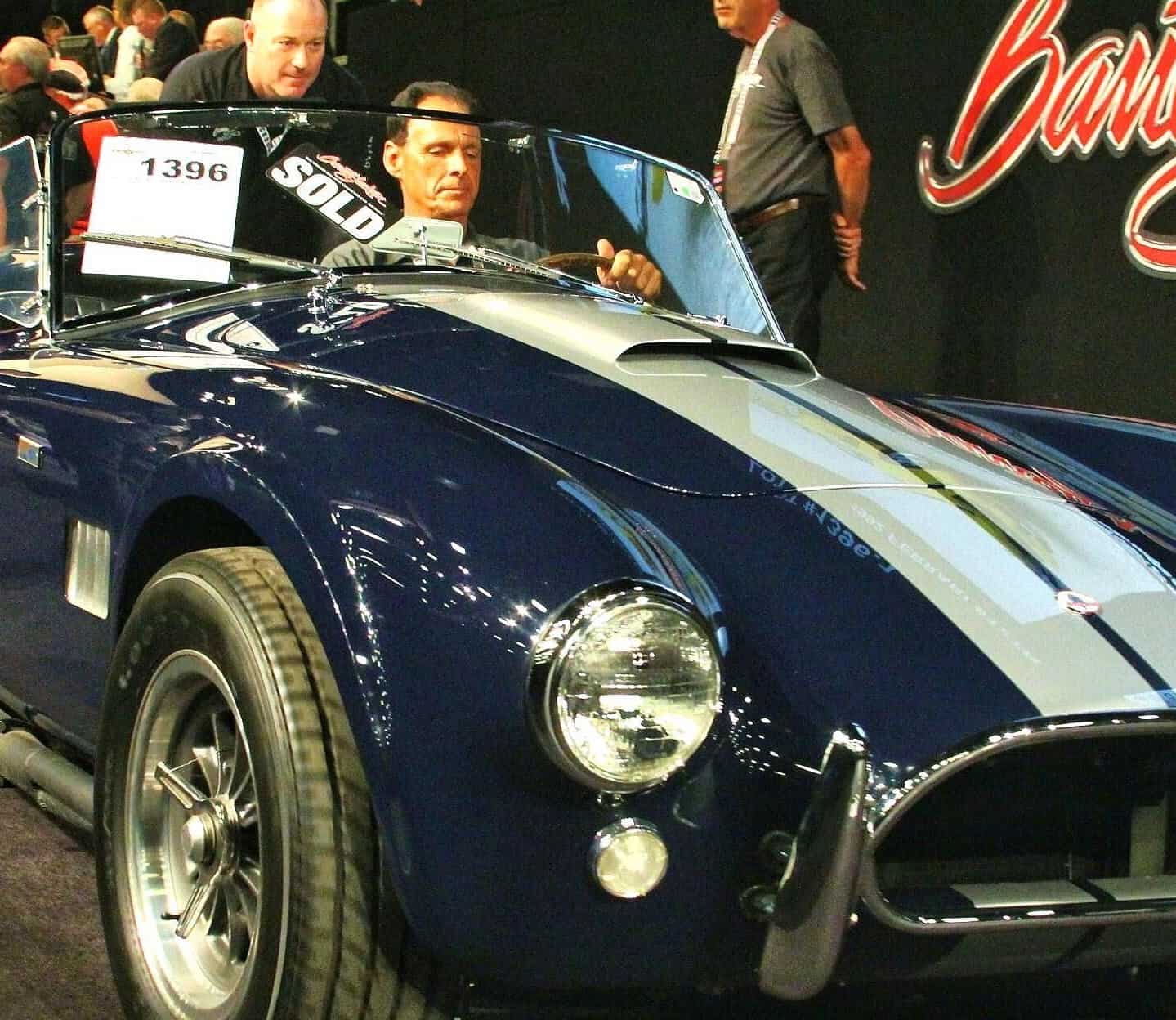 Cleo Shelby’s bright-blue eyes began tearing up as she watched one of her late husband’s landmark creations, a 1965 Shelby 289 Cobra, rumble onto the auction block at Barrett-Jackson’s busy Saturday sale in Scottsdale, Arizona.

“It’s very nostalgic for me,” she said in her rich British accent.

Her husband, of course, was Carroll Shelby, perhaps America’s greatest motorsports icon, who died in 2012 at the age of 89. Shelby was a familiar presence at Barrett-Jackson, both in person and in the form of his performance cars that are always hot sellers. How important is Shelby to the car community? Craig Jackson’s daughter is named Shelby in Carroll’s honor.

For Cleo Shelby, Saturday night was a poignant moment, her first trip back to Barrett-Jackson since Carroll’s death and witnessing his seminal creation, an original 289 Cobra, on stage before tens of thousands of cheering spectators inside the mammoth auction arena at WestWorld.

The bidding reached $720,000 when the auctioneer hammered the car sold, for an official result of $797,500 including auction fee, one of the highest results of the Saturday sale. Cleo smiled and shook her head.

“He never thought his cars would be worth anything like this,” she said. “Carroll was very understated. He never did it for the money. He just followed his passion.”

Barrett-Jackson’s results for “Super Saturday,” when the cream of the auction crop goes up for sale, were led by a modern supercar, an 887-horsepower 2015 Porsche 918 driven just 595 miles and sold for a resounding $1,760,000, the highest sale of the weeklong Scottsdale auction, Barrett-Jackson’s signature event.

But the biggest excitement that lit up the crowd Saturday was the appearance of veteran actor Burt Reynolds as he emerged from the car forever associated with him, a 1977 Pontiac Firebird Trans Am, which had served as a promotional vehicle for the popular movie Smokey and the Bandit.

People rushed the stage, cell-phone cameras raised, as Reynolds made his way to the auction podium to join Jackson and the auctioneers. The Trans Am, black with gold emblems, naturally, sold for $550,000 (including auction fee), most likely a record for a Trans Am. Appropriately, the car was purchased for John Staluppi’s Cars of Dreams Museum in Florida.

Two other Hollywood movie vehicles that came up for auction Saturday were of a more-recent vintage, the huge 1992 Peterbuilt 370 semi tractor that starred as Optimus Prime and the custom 1967 Chevrolet Camaro SS that played Bumblebee in the Transformers movie. Director Michael Bay was at the podium as Optmus Prime went for $121,000 and Bumblebee reached $167,200, both including fees.

The Bumblebee from ‘Transformers’ heads toward the staging area | Bob Golfen

Several of the top featured cars in Barrett-Jackson’s Salon Collection failed to meet reserve and were not sold, including the magnificent 1959 Ferrari 195 S Inter Superleggera coupe that reached $1.705 million, which was not enough to buy it. Barrett-Jackson auctions are known for its overwhelmingly no-reserve offerings, with the exception of some of the Salon Collection cars. The auction Saturday had a 98 percent sell-through rate.

Another Saturday favorite was the group sale of three Corvettes, each of them a first serial-number model, from the years 1955, 1956 and 1957. They sold as a single lot for $1.815 million, or $605,000 each. They were bought by megadealer and NASCAR team owner Rick Hendrick of North Carolina, who is a leading collector of top cars from the bowtie brand.

As ever, charity sales were highlights of the auction action, with three cars selling with 100 percent of the total going to benefit worthy causes: The 2016 Chevrolet Camaro Vin #001 sold for $500,000 to benefit Kettering University, a 2016 Ford Focus RS raised $550,000 for the Juvenile Diabetes Research Foundation; and a 1932 Ford hi-boy McGee tribute hot rod hit $105,000 for the Alex Xydias Center for Automotive Arts.

Despite the enormous size of the WestWorld facility, there was a sellout crowd with standing-room only Saturday afternoon and evening at Barrett-Jackson’s flagship auction, which last year saw a remarkable overall total attendance for the week of 350,000.

The top 10 sales for Barrett-Jackson’s Saturday auction were:

All results include auction fees.