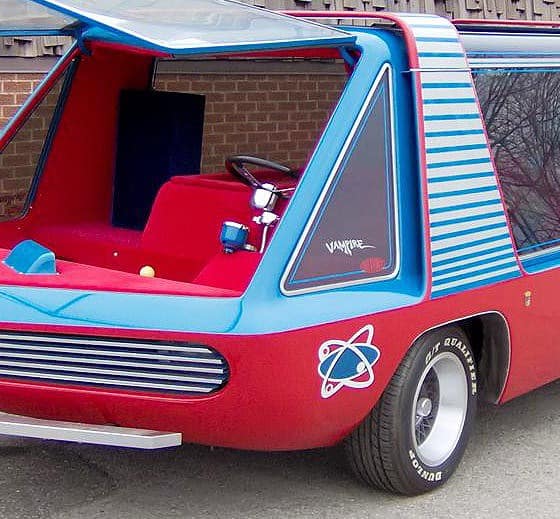 George Barris, the legendary King of  Kustomizers, left us late last year at the age of 89, but the many unique custom cars that he and his crew created over the decades remain as testimony to his innovative and often quirky imagination.

Five cars with the George Barris touch will be up for sale at Barrett-Jackson’s Scottsdale auction January 23-31, including a fanciful custom Dodge van and a mink-lined 1970 Corvette built for actress Farrah Fawcett.

The 1964 Turbosonic drag car is jet-propelled

Barris was no stranger to Barrett-Jackson, making a triumphant return to the public eye in 2013 when the original Batmobile he created for the ’60s TV show crossed the Scottsdale block to thunderous applause and an astounding $4.6 million sale price.

Barrett-Jackson has sold several other Barris creations, including a pair of candy-colored his-and-her 1966 Ford Mustang convertibles designed for singers Sonny and Cher Bono, and the distressed-looking antique pickup truck built for “ show.

The Barris customs to be auctioned during the Scottsdale sale are:

The 1951 Lincoln Lido with pinstriping by Von Dutch

1966 Dodge Tradesman “SuperVan” (Lot 1306) – The stylized custom van originally designed by Barris as “The Love Machine” was reborn to appear in the movie SuperVan with its interior transformed into a mini-disco. The unique van appeared in several other films and TV shows, including an appearance as a futuristic transit bus in Back to the Future II.

1970 Chevrolet Corvette (Lot 493) – Barris built this ‘Vette for the beautiful Farrah Fawcett during the height of her TV fame, opting to trim the interior with actual mink fur. This Barris custom is something of a “barn find,” coming to auction in as-found condition after decades in storage near Fawcett’s home town in south Texas. According to the Barrett-Jackson catalog, the car has been brought back to running condition.

1951 Lincoln Lido (Lot 978.1)– The luxury coupe was mildly customized by Barris’ shop back in the day with pinstriping applied by the famous Von Dutch. In various shades of green outside and inside, the coupe’s dashboard bears a George Barris signature.

1973 Lincoln ContinentaL Mark IV “Bugazzi”  (Lot 978.1)– Barris put his unusual custom touches throughout this Continental, one of five that he specially designed. The entire front end was custom built and, most notably, real marble was used as interior trim on the door panels, dashboard and steering wheel.

For more information about the Barrett-Jackson sale, see the auction website.