Countdown to Barrett-Jackson Scottsdale 2016: 32 Double Down 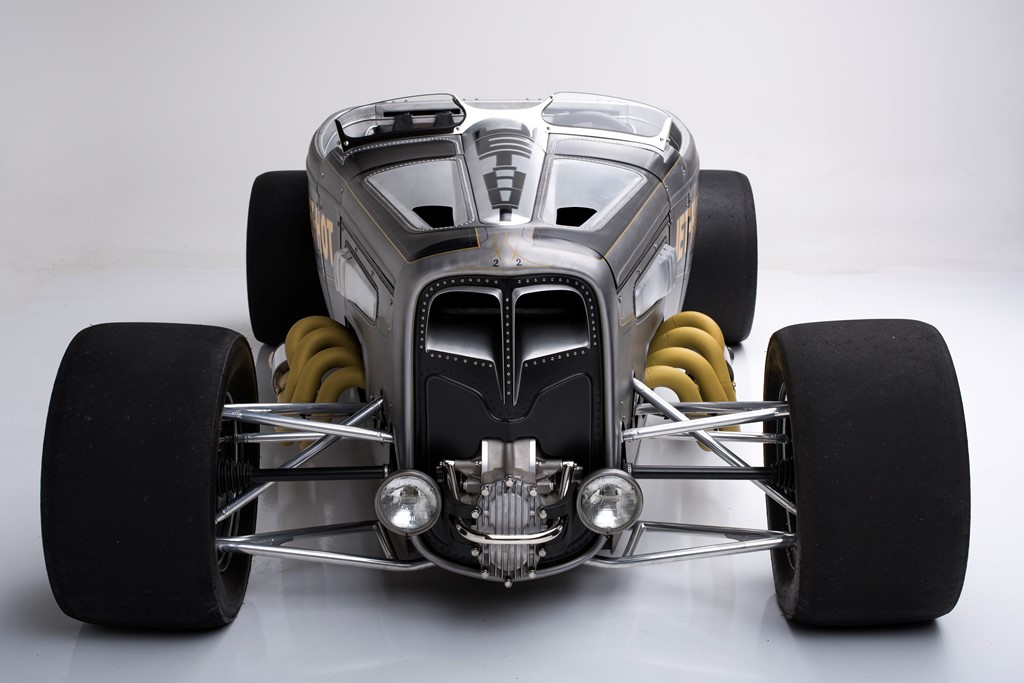 Editor’s note: This is the 29th in a 30-day sponsored series featuring cars to be sold January 23-31 during Barrett-Jackson’s 45th Scottsdale auction.

The performance coatings company Jet-Hot wanted to promote and showcase their products to the market and people who use them. They thought an outrageous hot rod might be the perfect messenger. About the same time, Atlanta hot rod guru and metal-bender extraordinaire Bryan Fuller of Fuller Moto began brainstorming a ’32 Ford-based Cannon Ball Race tribute car. Now that we’ve set the stage, it’s time to forget everything you ever knew about fenderless 1932 Ford roadsters.

This one is one conceived for the outer limits of performance. It’s only the second time in history anyone attempted to create something as dynamic as an all-wheel-drive deuce hot rod. This insanely cocky-looking animal is the result of those efforts.

If there was ever a Formula One series for ’32 Fords, one glance will tell you ‒ this 1932 Ford Custom known as “Double Down” is the car to beat. We’re looking at industrial-strength hot rod design in its purest form. Think of a P47 Thunderbolt with huge wheels and tires instead of wings and a propeller. The car’s mission is to be driven, raced and otherwise manhandled at the driver’s whim. Top-speed Bonneville runs or showing off on road courses are just two of it extreme capabilities.

The custom front-mounted Winters quick-change differential protruding through the grille on this “Double Down” roadster somehow completes that visual.

This car’s custom tubular chassis is a thing of beauty in itself – and the way this support structure so fluidly morphs into the car’s suspension is a display of intelligent engineering that is a joy to behold. Those suspension components are also handmade works of art.

Since there were no available blueprints for this endeavor, almost everything had to be imagined, engineered, produced and installed by the build team. The “aircraft-quality” approach during the construction process is evident everywhere you look on this car.

Front suspension consists of custom tubular upper and lower control arms. The front coilover shocks are mounted on their sides and operate via a pushrod arrangement, much like a Formula One car.

A Sprint Car-based rear suspension utilizes its own quick-change for the rear wheels and is similar to the one poking out of the radiator shell delivering power to the front two wheels.

For propulsion, only one of the most exotic engines ever produced in America would suffice, so a Boss 429 was selected and enlarged to 576ci, then fuel-injected. Engine preps were performed by Kurt Urban and Jon Kaase.

Since that quick change for the front end now occupies the area in the grille, the radiator was no longer welcomed at that end of the car. Cooling of this animal is accomplished with a Griffin aluminum radiator located in the rear and more or less imbedded into the area of the truck lid. Twin fans motivate the air through it. The plumbing challenge of this arrangement simply provided the builders one more opportunity to create engineering excellence.

We’ve heard these engines can easily make 700hp and more, even without unnatural aspiration. Regardless of the exact horsepower number, the driver of this car is king of the world for the duration of any highway or track excursion.

To say the car is Spartan-like in the driver’s compartment might be an understatement. Granted, it does not provide an abundance of cushy luxury in the traditional sense … okay, it provides none at all. But there’s nothing about this car that is traditional. On the other hand, its new owner will be rewarded with an experience that plugs him or her directly into a world so far apart from the norm that cup holders and carpeting will seem like the frivolous wishes of a spoiled teenager.

This 1932 roadster will always be unlike anything else anyone has ever seen before. The all-wheel-drive, horizon-eating masterpiece of a machine will be coveted for decades to come. After all, it’s the ideal vehicle to transport you to an altered state of consciousness whenever you feel the need.