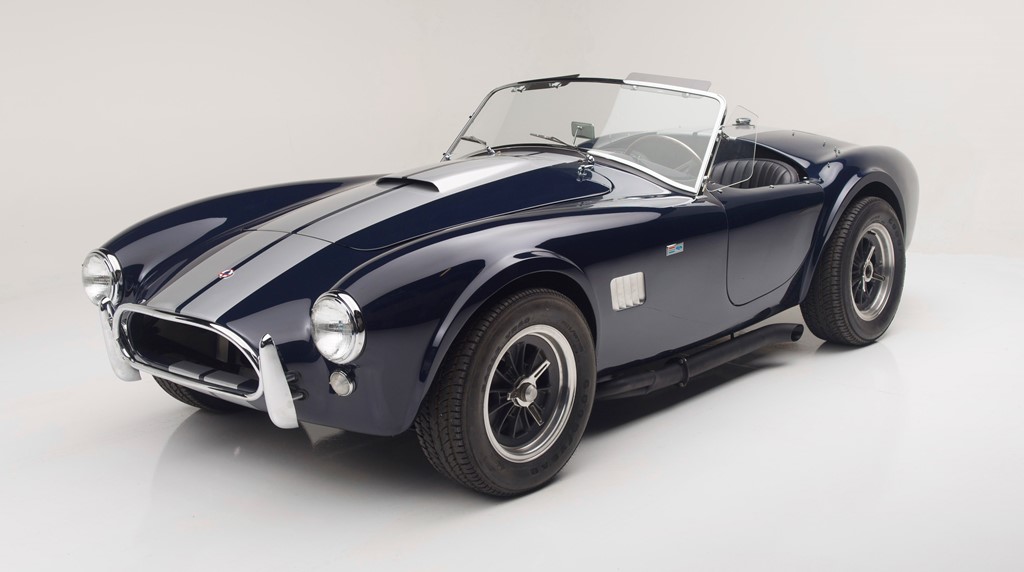 Editor’s note: This is the 19th in a 30-day sponsored series featuring cars to be sold January 23-31 during Barrett-Jackson’s 45th Scottsdale auction.

Few cars in history can match the impact of the Shelby Cobra; the 2,030-pound sports car was truly a game changer. From the street to the race track, Carroll Shelby’s Anglo-American hybrid altered the automotive landscape.

The street version of the Cobra was a media darling while the racing version dominated almost every series it entered. Cobras conquered sports car road racing in the United States, captured the FIA World Championship, won drag racing crowns and became a favorite of autocross participants.

From 1962 to 1965, the small-block (CSX2000) Cobra continued to evolve as competitors scrambled to catch up. By the time the leaf spring, Ford-powered roadster was replaced by a big-block version, the Cobra had become an American icon. And since only 580 total 289 Shelby Cobras were built, these roadsters are very rare.

The 1965 Shelby 289 Cobra Roadster CSX2495 on offer at the 2016 Scottsdale auction is a prime example of the final batch of street small-block Cobras. Featuring the desirable rack & pinion steering, hot 289 engine and rugged 4-speed transmission, it is the pinnacle of street “slab side” small-block Shelby sports cars.

Like most Shelbys, its history is filled with interesting people who enjoyed the car on the street and track. This particular car was the inspiration for the birth of a company that became very influential in performance circles.

Built by Shelby American in Venice, California, the then-red and black Cobra was shipped to Fort Lee Motors in New Jersey. Its first known owner, Fred Knapik, took CSX2495 to a Cobra Club event in Lime Rock, Connecticut, in the spring of 1973. By this time, the car had been painted light green metallic and featured Weber carburetors, a lift-off hood secured by four klik-pins, a hood scoop and a flat section of the rear flares cut out.

Knapik sold the car that summer to Ronald Sinisgalli of New York. In 1977, Jim Inglese of Connecticut bought CSX 2495 from Sinisgalli. He added 6/5″ FIA Halibrands, gold LeMans stripes and Belanger drag headers with side pipes.

The impact of this purchase was significant for it was the genesis for the company Inglese Inductions. According to Inglese, “I bought my first Cobra, CSX2495, in 1977, and it had a really hot 289 with Weber carburetion. It accelerated like a rocket, but it drove very poorly under 2500 rpm. I loved the carburetors, so I was determined to get them to work right, despite what everyone was telling me.”

So Inglese bought every book and piece of literature on Webers he could find. He invested hundreds of dollars into jets and metering pieces as he began a tuning process that lasted for 18 months.

Eventually, he ironed out the mechanical induction system and the Cobra became fun to drive. That’s when Inglese turned his expertise for tuning Weber carburetors into a side business. Before long, the company expanded into a full-time enterprise offering complete Weber systems, parts and tuning services. After earning a reputation worldwide, Jim Inglese eventually sold Inglese Induction Systems to Comp Cams.

After taking first place with the Cobra at the Northeast Fall Rally in Great Barrington, Massachusetts, Inglese traded CSX2495 to John Daly for a big block Cobra in 1978. Inglese kept the FIA wheels that were on CSX2495 for his new Cobra.

Daly put Shelby Sunburst wheels on CSX2495 in 1990, replaced the leather interior and carpet and repainted it red with white Le Mans stripes. He also replaced the hood hinges and latches, as well as the previously removed flat section of the rear flares.

Daly sold CSX2495 to Dale Bliss of Oklahoma in 1992. While in his possession, Bliss repainted it red with white stripes and changed the wheels to mags with knock-offs, but the car retained its Weber carbs. Bliss later sold CSX2495 to current owner Robert Benson of California, who commissioned a complete restoration. He repainted the car blue with silver stripes, and it still features the sexy Weber induction system, tasteful side pipes and period-correct Halibrand wheels. The car is simply stunning and ready to be enjoyed by its next owner.