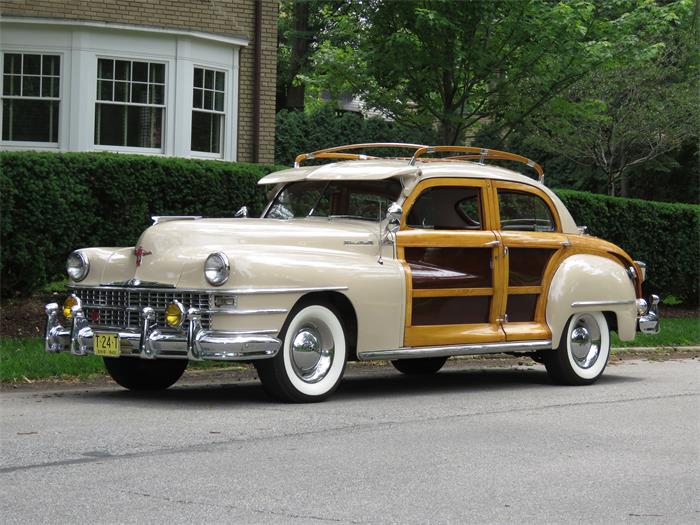 Picture yourself driving along the countryside on your way to the Hamptons for the weekend in a glamorous car. For the well-off-well-to-do you type, you would be cruising in nothing less than a Chrysler Town & Country which is a perfect combination of style, class, and elegance, while being a perfectly suitable family car, making this particular 1948 Chrysler Town & Country sedan our Pick of the Day.

According to the listing on ClassicCars.com, post-World War II automakers resumed production with the “Big Three” working overtime to meet the heightened demand for new cars. Chrysler in particular strived to make their cars desirable to those who wanted to project a luxurious lifestyle. The listing states that the “Town and Country exuded style and affluence and evoked the fine craftsmanship of a bygone era.”

The Chrysler Town & Country came as either a convertible or a sedan. The sedan was less popular, as historian Donald J. Narus wrote in Chrysler’s Wonderful Woodie: The Town and Country.

“The Sedan, while it did not share the glamour of the convertible, was perfectly at home on any of the swank estates of Long Island,” Narus wrote. “If you had a country place in Connecticut and you were anybody at all, you surely had a Town and Country Sedan to go along with it. After all, what’s a gentleman farmer without his handsome carriage? Where the Convertible had pizzazz, the Sedan had elegance, a marvelous blend of wood and steel.”

This particular sedan is in excellent condition and as the seller says the “wooden bodywork is reminiscent of the finest wood-hulled boats of the 1930s and 1940s.”

According to the listing, this 1948 Town & Country sedan has had a full restoration and is powered by Chrysler’s Spitfire inline six-cylinder engine mated to the Fluid Drive semi-automatic transmission.

As depicted in the photos, the car has a red plaid interior, and the listing states that options and upgrades on this vehicle include “twin spot lights, electric gas cap, back up lights, genuine mahogany inserts, Diamondback radials and an outside visor.”