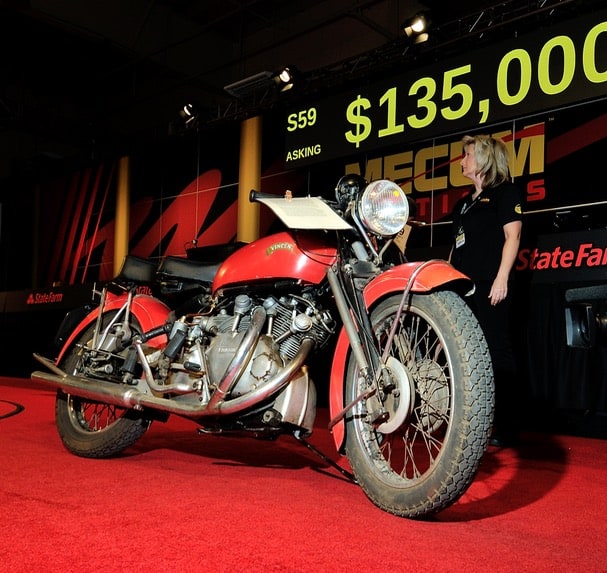 In October, the Hagerty Price Guide added 9,200 vehicles to its valuation tools website. But they were neither classic cars nor collectible pickup trucks. They were motorcycles, built between 1894 and 1996 by 61 different manufacturers.

“Motorcycles are one of the fastest-growing segments in the collectible vehicle market,” McKeel Hagerty, chief executive of the family-owned insurance and valuation company, said in a news release at the time.

“The recent interest is inspiring enthusiasts to pull their bikes out of long-term storage to enjoy again and share with the next generation.”

And to offer up for sale at auctions, as we’ll see January 6-9 when the 2016 collector vehicle auction calendar opens with two major motorcycle sales in Las Vegas, where Mecum Auctions stages its 25th annual MidAmerica’s Las Vegas bike sale and where Bonhams hosts its yearly offering of classic two-wheelers.

“From a collecting standpoint, motorcycles are very approachable because many can be purchased for less than $10,000,” Hagerty noted, “and they take up very little space in your garage.”

Hagerty reported that the number of motorcycles offered at auctions nearly doubled in the past year and the demand for vintage motorcycles among collectors has grown by 50 percent so far this decade.

Hagerty’s research found the most paid for a collectible motorcycle was the $1.62 million spent at a Profiles in History auction in 2014 for the “Captain America” Harley-Davidson Panhard from the Easy Rider movie. However, it estimates that the 1903 Harley-Davidson Single, of which only one is known to exist and housed within the Harley-Davidson museum in Milwaukee, is worth $15 million.

As if to validate Hagerty’s comments, several major collectors are sending motorcycles to the Mecum MidAmerica auction at the South Point casino and exhibit hall.

“We’re honored to offer this year’s consignments at our 25th anniversary auction,” Ron Christenson, president of the Mecum MidAmerica Motorcycle division, said in a news release. “The consignment list as a whole, as well as the individual collections we’ll be offering, are top-quality collectibles that any enthusiast would be thrilled to own. Bringing them all together in one place is a dream come true.”

Among the 700 or so motorcycles at the auction are those coming from 13 private collections, including 38 being shipped all the way from Allen Smith’s collection in Australia.

Bonhams starts its preview at Bally’s hotel and casino at 9 a.m. Wednesday with sales of some 250 vintage motorcycles Thursday starting at 11 a.m.

Headlining the sale are Steve McQueen’s Triumph “desert sled,” the only red 1951 Vincent White Shadow ever built and a Harley-Davidson factory-team oval-track racer.

McQueen’s 1963 Triumph Bonneville desert sled was modified for the movie star by Bud Ekins and painted by Von Dutch. It comes to auction from the Larry Bowman collection. Also from the Bowman collection is the 1929 Harley-Davidson JDH racer formerly raced by Glen Kleckner in the 1920s and later restored by Connie Schlemmer with engine rebuild by Mike Lang, as well as a 1922 Ace Four with sidecar and a 1910 Royal Pioneer single.

Meanwhile, the only Chinese Red White Shadow is being offered for sale for the first time since the early 1980s.

Also on the docket are: