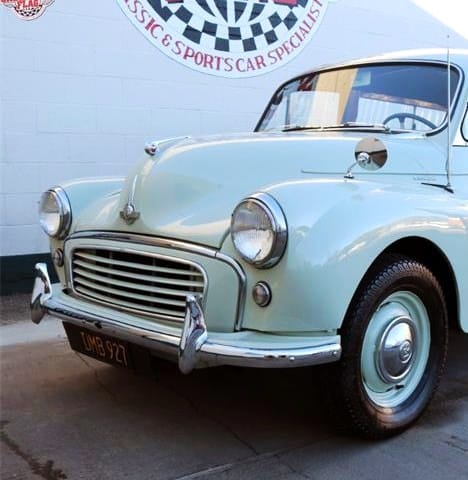 The 1957 Morris Minor woodie is said to be in solid, good-running original condition

Morris Minor was the little car that put Great Britain back on wheels after World War II. Created under the leadership of visionary British designer Alec Issigonis (later responsible for the Mini), the pert Minor was both durable and stylish, and well over a million were sold between 1948 and 1972.

Many Morris Minors were exported to North America, and the enduring favorite of those was the little two-door, wood-trimmed wagon. The Pick of the Day is one of these woodies, a 1957 Morris Minor Traveler, which the classic car dealer in Marina Del Rey, California, says is in fine original condition after only two owners.

The wood trim on the Morris Minor Traveler sets it apart

“Delivered new in Palos Verdes California and still retaining both its original black California license plates … it’s had only two owners its entire life, the second for around 45 years,” the dealer says in the ClassicCars.com listing. “This woodie is rust free with no prior damage.”

Although the listing does not provide mileage for the car, it does say that it is “superbly original with the only modifications being front disc brakes and a gauge cluster for oil pressure and water temp. The panels are very straight with good quality paint. The interior is in as new condition. The wood trim looks to be original and has been re-varnished.”

The Traveler would be a picturesque car for showing up at a Christmas party loaded with wrapped presents in back. But don’t be in too much of a hurry getting there; the Morris has a tiny, fuel-efficient four-cylinder engine, and its performance is modest. But that’s part of the fun.

“This Morris Minor retains its original 948cc engine and four-speed manual transmission,” the seller notes. “The car starts easily and runs smoothly through all its gears. Finished in its original Birch Grey with stunning red interior, this has to be one of the nicest ones around.”

Morris Minors in good, rust-free original condition are fairly rare, and this one sounds like a real find for a British car buff. Reasonably priced at $24,900 for a piece of motoring history, and a cool little woodie at that.