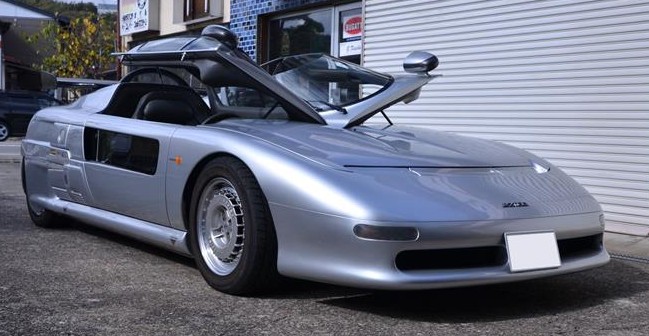 Not so long ago in a galaxy not so far away… In a period of space exploration of the late ’80s, Giorgetto Giugiaro created the Italdesign Aztec. Sometime after, the Japanese owner of Carozzeria Savio acquired manufacturing rights for the Aztec from Giugiaro.

The car, resembling that of a spaceship from the Galactic Empire in Star Wars, debuted at the Turin show as an innovative show car, making the 1988 Italdesign Aztec our Pick of the Day.

According to the listing on ClassicCars.com, the Aztec project team was born from a partnership with a real-estate management company, which was set to handle marketing, and Carozzeria Savio. The car was projected to have a production run of 50, with cars 1-8 imported to Japan when sales began.

However, debate surrounds the car as to how many were actually produced. According to the listing, 15 were built, yet other sources have quoted 18, 25 and as many as 50 produced. In any case, many of the known production cars were completed behind schedule.

In recent times, the listing says the Aztec has become one of the most sought-after concept cars among enthusiasts due to its scarcity and its close resemblance to spaceships from the Star Wars movies. According to the seller, interest in the car has heightened due to new attention from the younger generation with the latest instalment of the Star Wars saga.

This particular vehicle, the second one produced, was made famous by its first owner, a Japanese executive who purchased it for a million dollars in 1992. And it bears the signature of Giorgetto Giugiaro.

The Aztec features a mid-engine Audi Quattro 5-cylinder turbo and five-speed transaxle coupled to front and rear differentials from a Lancia Delta.

Giving the Aztec a space-worthy look are the double canopy seats, which lack air conditioning. The listing states “when driving an Aztec, there is no doubt that you will be the center of attention in any season. One thing you should never forget is to wear a helmet under the double canopy. If possible, use an Air Force helmet. You are guaranteed to feel as if you are in a Star Wars movie.”

The car is being offered by a Private seller in Nagoya, Japan, for $535,000. Which in Galactic Empire money would be, well, we’re not sure.