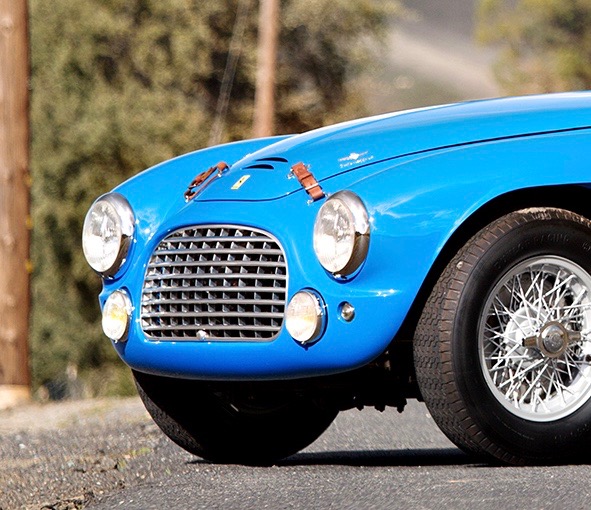 Pre-auction estimated values on the Ferraris range from $3.4 million to $6.5 million.

“We are privileged to be offering a variety of exquisite automobiles from Touring, Pininfarina, Boano and A.P. Compton,” David Gooding, president of the company he founded, said in a news release. “Automotive art is best exemplified by the top coachbuilders on the finest chassis such as Ferrari, Alfa Romeo, and Bugatti.”

“The coachbuilt era was a very short period, which ceased in the mid-1960s, yet delivered to the world some of the rarest and most beautiful rolling art examples,” Gooding’s company said in its news release.

The 0060 M was based on the 166 MM/195 S chassis and is one of only six examples of the Berlinetta Le Mans. It was displayed by Luigi Chinetti at the 1950 Paris Auto Salon and was raced in Italy before being sold to Briggs Cunningham, who raced it at Sebring, Watkins Glen, Bridgehampton and in Buenos Aires.

Later, the car was owned by Road & Track writer Henry N. Manney III. Then it went to England, where it participated in the Mille Miglia Storica and the Goodwood Festival of Speed.

It has been restored to its original light blue livery.

The 330 GTC Speciale debuted at the Brussels Motor Show in 1967 and is one of only four built. It originally was sold to Italian heiress Maria Maddalena Da Lisca, who also was the wife of pasta manufacturer Pietro Barilla and has been documented by Ferrari historian Marcel Massini.

The Alfa Romeo 1900C SS Coupe Speciale is a one-off unveiled at the 1955 Torino Motor Show. It was part of the Mario Righini collection for several decades and was part of the postwar preservation class at the Pebble Beach Concours d’Elegance earlier this year. The car is unrestored and offered not only at public auction for the first time, but with no reserve.

The Bugatti, chassis 49119, was first presented at the Olympia Motor Show in London.

While less known than Touring or Pininfarina or Boano, Arthur P. Compton started producing bodies for sports cars in the 1920s, became chief designer and general manager at British coachbuilder Jarvis (Wimbledon), but again set up his own business, first with partners and then on his own, building bodies into the mid-1930s under the Arrow banner.

Like the Alfa, the Bugatti is being offered at public sale for the first time.

World-rallying Porsche 356 is prepared to conquer the Antarctic