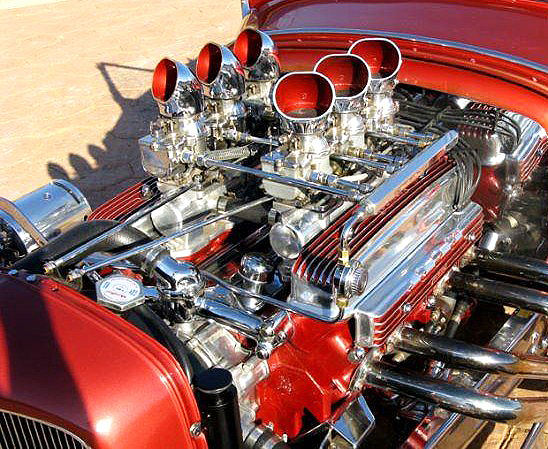 History takes many forms, and as with automobiles, an ever-changing progression of styles and tastes. The resurgence of classic street rodding has resulted in rising values for famous custom jobs from the past and the return of some great old show cars to the collector car market.

The Pick of the Day is one of them, a 1931 Ford hot rod roadster from the late 1960s that was originally built by customizer Jim Cooper and recently was owned by famed car designer Chris Ito. With the cruelly ironic name of Cockroach, the show car has survived in original preserved condition for four decades, according to its listing on ClassicCars.com.

The hot rod also bears witness to the glorious excesses of that era’s customizers, such as its richly applied paint in a highly creative color.

“This incredibly intact show rod from the late ’60s known as the Cockroach, features the original 78 coats of candy apple amber lacquer sprayed in the late ’60s- early ’70s,” the seller, a classic car dealer in Cadillac, Michigan, says in the ad.

The seller goes through a laundry list of the custom features of this build, including a chrome-plated modified frame and floorboard with custom wishbones, plated suspension and hand-made nerf bars; a Buick Nailhead V8 dressed up with Weiand Nailhead accessories and topped by six chromed Stromberg carburetors fed by towering scoops; hand-built headers; a body shell channeled to match the cowl height; and an interior finished in diamond-pleated upholstery and Hollywood dashboard panel “with a full array of vintage SW instruments.”

The Cockroach has received some recent recognition, notably serving as the cover car for the Spring 2013 edition of Traditional Rod and Kulture magazine and featured in the Pat Ganahl book Lost Hot Rods II.

Although this iconic hot rod is far from lost, having been carefully tended by a succession of appreciative owners, according to a blurb from Traditional Rod and Kulture. A number of photos from the car’s original six-year construction are included in the sale, the dealer says.

Although the seller does not mention the running condition of the Cockroach, the asking price of $48,496 seems fair enough for this colorful piece of hot rod history.