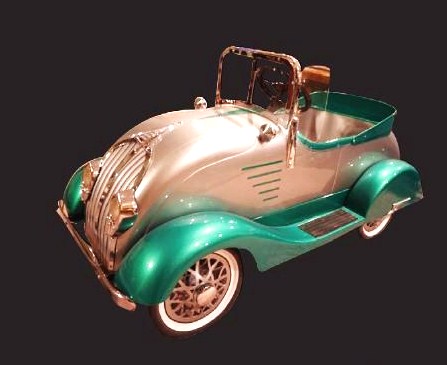 Barrett-Jackson wowed the collector-car world last January when Ron Pratte’s monumental collection of cars and automobilia brought in more than $40 million at the Scottsdale auction.

It was a groundbreaking event highlighted by the record sale of Pratte’s horde of vintage automobilia: signs, neon, pedal cars, toys, souvenirs, gas-pump globes and sundry other items from our automotive past, most of it in superb condition.

So what could Barrett-Jackson do for an encore?

Next month, the 45th annual Scottsdale auction will again host a gigantic selection of desirable pieces of automobilia, this time from four major collectors that Barrett-Jackson says represents 85 years of accumulation. More than 800 items from these collectors will cross the block, including 40 vintage pedal cars, 100 neon signs and 35 old-time gas pumps.

Vintage pedal cars will be among the featured automobilia

The four consigners are familiar names for Barrett-Jackson fans: Gordon Apker, Art Redford, Jim MacKinnon and Richard LeRoy. Among them, they are offering many rare and exquisite pieces of automotive collectables, some of them one-of-a-kind, others iconic pieces of industrial artwork.

For Apker and Redford, who are selling portions of their collections, this is the first time they are parting with any of their hand-picked automobilia items, according to Rory Brinkman, Barrett-Jackson’s automobilia director.

“Collectors have been beating on their doors for years,” Brinkman said in a Barrett-Jackson news release. “This is a once-in-a-lifetime opportunity.”

Apker is well-known among car people for his top-drawer classic automobile collection, which has brought him to the highest levels of the hobby at such places as the Pebble Beach Concours d’Elegance and any number of rallies and showcase events.

Apker’s fascination with automobilia started at a young age when he was attracted to motoring memorabilia while working at a service station. He started serious collecting in his 20s, he said, and since then, has gathered an enviable array of antique pedal cars (he’s offering 20 at Scottsdale), restored gas pumps, neon signs and other choice pieces. When collecting, he doesn’t consider the investment value of his pieces, he said, but buys whatever he likes.

“When I worked at the gas station, I had nothing,” he said in the news release “I guess now I’ve gotten to the point where the American dream has been met. I like to go back and remember how it was. I don’t ever want to forget that.”

Redford said that one of the star pieces of some 450 items he’s offering is a six-foot-tall Washington Chief porcelain sign. He loves collecting automotive signs, he said, because of their pleasing appearance and low maintenance: “You just clean it, hang it up and enjoy it,” he said.

“I have a dozen or so ‘Holy Grails’,” he added, although he has every intention of searching for more. “There’s always one more porcelain sign out there.”

Barrett-Jackson said its offerings of automobilia, including the four collections, should total around 1,300 pieces crossing the block during the flagship Scottsdale collector-car auction, which takes place at WestWorld from January 23-31, 2016.

For more information about the Scottsdale event, visit the auction website.