Unique Corvair truck/boat prototype going to Mecum’s Kissimmee sale (or does this make it a sail?) 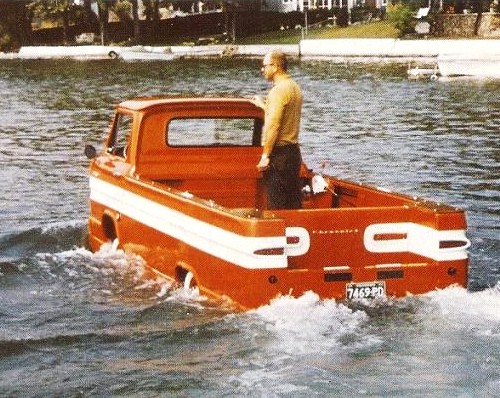 Just when you thought you’d seen everything, here’s a truly strange piece of Chevrolet history: the one and only amphibious Corvair pickup truck. Who knew?

The 1961 Corphibian, as it was dubbed by Chevy’s adventurous engineers, can drive to the lake, jump in and sail off into the sunset under its own power. While the little Amphicar from Germany is well-known among car collectors, the Corphibian never got past the prototype stage and has been pretty much forgotten.

Bidders have the chance to acquire this wacky contraption in January when it comes up for sale at Mecum’s auction in Kissimmee, Florida, just the thing for exploring the inlets. The floating Corvair will join about 3,000 collector cars expected to cross the block during the January 15-24 sale.

According to Mecum’s catalog description, the Corphibian was built by Chevy engineers in conjunction with the Hulten-Holm Company of Pontiac, Michigan, with a waterproof fiberglass hull, a wooden rudder and a pair of propellers in the stern powered by the truck’s rear-mounted flat-six-cylinder engine. It can be piloted on water from either the cab or the pickup bed, and driven the normal way on land.

For whatever reason, but one would imagine cooler heads prevailing, the Corphibian was never produced for the driving/boating public. What might Ralph Nader have made of this?

The red-and-white Corphibian is described as being in excellent original condition with only 157 terrestrial miles on its odometer, and ready to deploy on land or lake. Mecum places its pre-auction value at $75,000 to $100,000, but who knows where the price of this unique vehicle might sail.

We were alerted to this Mecum entry by Bringatrailer.com, which wrote about it under a headline we wish we thought of first: Unsinkable at Any Speed.

For a YouTube video of the underway Corphibian, see truck/boat.