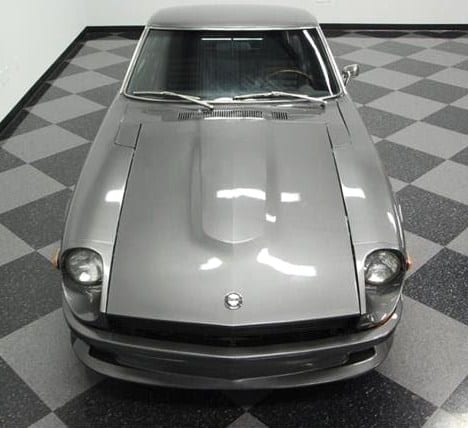 The Datsun 240Z  changed everything in the world of affordable sports cars. It offered serious performance, tremendous build quality and striking styling, all in a car that cost less than such sports-car competitors from Triumph, Alfa-Romeo, MG and Fiat. Not only did the 240Z perform at the dealership but also at the race track, with teams fielded by Peter Brock and Bob Sharp dominating SCCA racing.

The Pick Of The Day is this stunning silver 1972 Datsun 240Z located in Lutz, Florida, with an asking price of $17,995, which represents a very solid deal for the buyer, and I would buy this car in a minute if it’s half as nice as it looks in the pictures.

The Datsun’s interior seems to be in excellent condition

A few years ago, a nice 240Z was easily available for $10,000, but those days are now long gone and values for good examples have been on the rise.

According to the dealer’s listing on ClassicCars.com, this car has received a high quality bare metal respray, and has received numerous fantastic upgrades. Some of these include front and rear spoilers, American Racing Libre-style alloy wheels, a Tocico master cylinder, an upgraded three-row radiator, a Kyosan Denki fuel pump and a 280ZX alternator.

None of these upgrades hurts the value of the car and only work to make it better and more reliable. Additionally, this 240Z has a terrific original-pattern interior, original radio and looks as clean underneath as it is on top.

The 240Z makes a perfect first-time collectible sports car offering classic looks, racing history and reliability, all in a car that still has quite a bit of room for appreciation. This car looks to be rust free and in fine condition, and one I would seriously consider buying.